"My daughter took the Ortho Evra patch in 2004," says April. "She started to have chest pains but her doctor thought it was just an infection." Eryn was only 24 years old when she passed away. "Some days I just don't want to go on."

"Eryn went to the doctor a few times but he said it was an upper respiratory problem," says April (not her real name pending a lawsuit). "She was given antibiotics and sent home. In December she went on a cruise with her childhood sweetheart; it was a five-day cruise and she had her cycle for three days but continued to spot until we rushed her to the hospital January 28th - a night I will never forget. 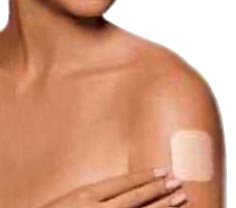 She had left our house the night before to dog-sit for her brother, not far from here. Through a series of phone conversations I had with her, I knew that something wasn't right. When we found her at my son's house, she was pale white (I thought she was dead) and unconscious. I grabbed her and I yelled at her; she came to for a bit but not enough to know what was going on.

My fiancé and I drove her to the hospital - it was only two miles away. I was panic -stricken; I can't even describe how I felt. When we got there, they immediately thought it was a drug overdose. Of course I said the typical things a mother would say -- 'Not my child.' They had a hard time finding a vein but started an IV. Then we watched her blood pressure go from 110/70 to 250/180 and they rushed her to a CAT Scan. They found two bleeds on her brain. The hospital didn't have a neurosurgeon nor an ICU to handle her, so she was incubated. But she fought like crazy - she didn't want the tubes down her throat - but that was the only way she could be flown out by helicopter. And she was heavily medicated.

Eryn never woke up. She was in a comatose state for two weeks; she had a feeding tube in her stomach.She had two major strokes that left her paralyzed. She had MRIs and CAT Scans done daily.

On February 8th, she was coded blue and had two heart attacks in front of us.

The second heart attack left her brain dead - she was without oxygen for 15 minutes. They did another CAT Scan the next morning and said that she couldn't be moved again because her body was riddled with blood clots.

We sat with her the whole morning and at 10 a.m. the neurosurgeon said there was nothing more that anyone could do. At 6.30 that night they asked us to sign a DNR. By then we watched her fingernails turn blue and the rest of her body was shutting down. At 1 a.m. the following morning she had a cerebral fever: her arms were frozen stiff because there was no circulation. At 3 a.m. we spoke with the doctors again and they suggested we take her off the machine. We didn't know how long she would last -she was full of morphine. They shut the machine down at 4.12 a.m. and at 4.15 a.m. she passed away.

They let us have 15 people in her room. Several of the nurses were so fond of her - she was so young. One of the nurses, Irene, sat with us and it wasn't even her shift. For two weeks we stayed in that room with her: we played music, read to her and stayed by her side.

It was the second day of her hospitalization that we determined Ortho Evra was to blame. She wasn't on any other medication. They took the patch off her right away at the first hospital. The neurologist wasn't convinced at the time, thinking she had some rare brain disease. Tests were flown out everywhere but she had no infectious diseases. She never smoked and gave blood every few months. A couple of the nurses suggested that Ortho Evra was to blame. Then I found a lawyer and I sent him all of her medical records. He said that their pathologist, hematologist, cardiologist and neurologist all confirmed that her death was caused by the Ortho Evra Patch.

We did everything together, we were so close. She got me a blanket for Mother's Day one year. It said 'We laugh together, we lie together, we cry together, best friends are we, my mother and me, Happy Mother's Day, love always, Eryn.' There's not a half-hour that goes by that I don't think of her. I go into her room all the time and I have her picture that I look at every morning, every night."

We thank April for sharing her story with us and we are very sorry for her loss. April was very brave to talk with us during such a sad and tragic time.

If you have or a loved on has suffered from blood clots, heart attack or stroke, while using Ortho Evra, please contact an [Ortho Evra] lawyer who will evaluate your claim at no charge.
Request Legal Help Now