In June 2006, Amanda Grenon, aged 25, experienced severe leg cramps and swelling that caused excruciating pain. She had recently been on the Ortho Evra Patch. 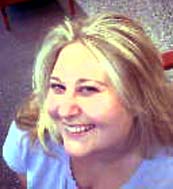 "I called my doctor and told him my symptoms but he didn't think it was that important, said Amanda. Neither Amanda or her doctor equated the warning signs to a blood clot, or the Ortho Evra patch. "Although he didn't have an opening, I went to his office anyway and sat in the waiting room. By the time I got there, my entire leg was swollen and purple. The nurse took one look and called the doctor - he wasn't in the office - and she told me to go to ER right away. Luckily it was adjacent to his office.

The nurse thought it was a possible blood clot but until a Doppler was done, like an ultrasound, they couldn't tell for sure. As soon as I got to ER a doctor told me that I had all the symptoms of a blood clot. A technician scanned my leg and sure enough, he found a massive clot. There is a main vein running down your leg and right in the groin area the clot was cutting off the blood supply to my leg, hence the discoloration.

Blood thinners were immediately injected into my stomach and by the time I left hospital, one week later, I was covered in bruises from all the injections. The doctor said I was lucky because if the clot had moved further up my vein, I might have died.

What a close call! They call blood clots the silent killer because quite often you don't get any symptoms. In my case they started as leg cramps in September but I wasn't hospitalized until November. My doctor told me that it takes from three to five days for a clot to develop, so in the course of several months, it developed and moved up my leg.

In September, I got a pain in my calf but I thought it was just a charley horse. My doctor thought I had low potassium so I had blood tests but they came back normal. Then I was referred to an orthopedic surgeon, thinking I might have suffered an injury. Nobody ever thought that it could have been a blood clot until I showed up at my doctor's office in November with a purple leg.

I feel like I have been robbed of my health and I am so frustrated. I have so many medical bills already, it is ridiculous. Now I have to get blood tests every week and I will be on blood thinners for God knows how long. I am only 25 years old and these are supposed to be the best years of our lives. It is terrible to be ill; I feel so bad for all the women who are suffering from taking Ortho Evra. It isn't right that the drug makers got so greedy and put money before our well-being.

It is beyond frustrating that drug manufacturers could do this to millions of women.

If you have or a loved on has suffered from blood clots, heart attack or stroke, while using Ortho Evra, please contact an [Ortho Evra Lawyer] who will evaluate your claim at no charge or obligation
Request Legal Help Now