Two women, Julie Bryant and Stephanie Simpson, realize they are lucky to be alive today. Their stories are similar: both took Neurontin for pain, both wanted to commit suicide -- the mental anguish caused by this drug is overwhelming.

Julie Bryant of Marin County, CA:
"Two years ago I had extremely painful back injuries and a pain specialist prescribed Neurontin for muscle spasms. I didn't notice any change in my personality at first because depression is something that I have lived with my entire life, but I always had it under control. I was taking antidepressants and doing well. 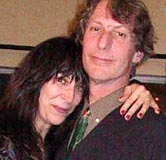 Then I started having thoughts of death; I don't know how to explain it but these thoughts were in my head night and day. I just wanted to walk out into the snow and never come back. I was aware that it wasn't an appropriate thing to do but I had to fight this feeling all the time.

I thought of all sorts of ways to kill myself but I have children and responsibilities. And I have a belief system that says you carry everything with you [on a spiritual level], you can't solve your problems by killing yourself... You just have to soldier on.

Thank God it was only a few months of hell. Nobody knew what was wrong with me. My husband Patrick was very scared and afraid for me, but he didn't know what to do. I couldn't even get out of bed; I was utterly debilitated.

I had no idea it had anything to do with Neurontin. I was crying non-stop for a few months and it got worse. The psychic pain was so strong, I was out of my mind. Then I heard in the media somewhere about a class action lawsuit against Neurontin.

As you might imagine, that caught my attention. I thought 'ohmigod' that is what is wrong with me. I stopped taking Neurontin and within two days I was back to normal! If it hadn't been for me reading that article, I don't know what would have happened to me.

Since then I warn everyone, including my pharmacist and especially my doctor. I told him that he should watch his patients carefully because some of them may not have the wherewithal to look after themselves.

You blame yourself, thinking, 'It must be my fault, why am I like this?' There was nobody treating me who knew anything about it. Even my psychiatrist who prescribed my anti-depression medication was unaware of Neurontin. She knew that I was taking it in conjunction with all my other meds.

I think of the people taking Neurontin, killing themselves. Where are the warnings, why don't people know?

Frankly, I am appalled that it is still on the market without massive warnings. There should be a black box label saying: 'If you experience symptoms of depression, stop using immediately.' Not everyone can hold out when you suffer like this.

When I heard that lawyersandsettlements was writing about Neurontin, I just wanted to tell my story because it needs to be told and shouldn't be ignored. Pharmaceutical companies are pulling a fast one on people like me.

I don't know if three months of suffering is worth anything to write about, but I am happy to be alive. It isn't right. And when Pfizer hears these stories, does it care? I think the negative publicity about Neurontin is still being carefully controlled."

Stephanie Simpson from Ohio:
"About five years ago I had back problems and around the same time I was also diagnosed as bi-polar. My psychiatrist said that Neurontin would be good for me, kind of like one-stop shopping - it is a pain reliever and would also treat my bi-polar disorder. I took it for one year and one day when I was at work I had a headache and took an over-the-counter medication... I ended up taking the whole bottle of pills at work. (I am a nurse and I work in a physician's office.)

Looking back, I had been in an odd frame of mind leading up to this day and this was very atypical of me. I thought that if one pill is good, more would be better; it would fix whatever was making me feel odd. Then I realized, ohmigosh, look what I have done!

I had to spend 24 hours on the psychiatric unit and then I was discharged. I had never been certifiable before. Fifteen years ago I lost a child and I was deeply saddened and grieved but I didn't feel this bad.

I didn't go back to the pain specialist but I did tell my psychiatrist. He saw me and treated me at the hospital. He took me off Neurontin right away and prescribed another medication. He had read studies about what had happened to other people - contraindications of the medication and he explained to me that I had an adverse reaction to the medication.

I haven't had any similar symptoms since then. I feel well managed on the medications I am on now. It surprises me that more people have taken this and that is disconcerting.

There should be more research done by the FDA or Pfizer. There should be some accountability by the manufacturer; they must be aware of these side effects. Physicians are still prescribing Neurontin for pain, albeit for short periods of time. I feel like not enough research was done with the medication and using it off-label was not a good thing."
_________

The manufacturer Pfizer lists side effects from taking Neurontin on its [website]. Depression and suicidal tendencies are not mentioned.
READ MORE ABOUT Drugs/Medical
READ MORE ABOUT Personal Injury

If you or a loved one has attempted suicide while taking Neurontin and would like a free case evaluation, please fill out this [Neurontin] complaint form.
Request Legal Help Now

Posted by
no body
on September 23, 2016
i recently took over 50 neurotin 300mg and i am waiting to die. will it kill me? my dr prescribed it to me for anxiety but it dont help so i really dont take it. my pharm just gave me 3 months supply of it and i really took half the bottle. im sorry for telling u this but i dont have know one else to turn too. i feel really funny and i dont like it. i tried contacting my dr but no answer. im ready so good bye
Posted by
Cassandra Arango
on November 4, 2014
I had hip replacement and elbow surgery in 98 I started taking neurontin 800 mg I told the doctor they made me feel funny I told him I cry all the time he said to keep taking them I stop having anything to do with my kids and boyfriend then I heard voices telling me death was better I took a box of sleeping pills 3hrs later I vomited the pills and cried why didn't I die I took myself off them and been fine ever since
Posted by
Terrie Hampton
on June 26, 2012
On jan 4 1999 I silpped on ice and ruptured the disc in my neck. Dec 15 1999 surgery was done but the surgern messed up and I was in very bad pain. The pain Dr had put me on neurontin and within 2 weeks I started slipping down into what I called my black well of hell. Everyday was a struggle to survive evryday I lost that much more of reailty. By the middle of summer 2000, the depression and darkness got to the point that all the world around me didnt matter not my husband or 2 sons all I wanted was for the depression to go away and the only way for that was to happen was to end my life. I took a handful of the pills and waited for death to come and let me finally be in peace but what should had killed a horse it only made me sick and was put into a pysc ward for 3 days. I was weaned of the neurontin slowly but the damage was already done I deal with the thought I would have left my 2 sons motherless all because of taking neurontin