Kugel Mesh? Get Your Surgical Report

Cilcia DeMons had a hernia repair with a mesh patch - twice in the same area. "All my doctor told me was that the original mesh didn't cover the entire area and I have no idea what kind it was," says DeMons. "For all I know, it could have been a Kugel Mesh patch that broke."

"My first hernia was repaired when I was in the military - at Langley Air Force Base here in Hampton," says DeMons. " I was an outpatient and the surgeon used a mesh patch. I had an incision around my navel and I don't know how they did it but it went down to my right groin area and that is where the patch stayed. 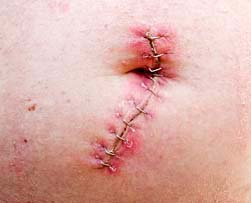 I was sent home and felt okay but in November of last year, every once in a while I would get a sharp pain in my right groin. It was the same kind of pain that I had before but I didn't think it could be a hernia because I had already had it fixed. I went to the doctor a few weeks later because the pain was persistent. Unfortunately the doctor wasn't in that day and the nurse practitioner said it was probably a pulled muscle and I should take some Tylenol...

The Tylenol didn't work. I went back to the doctor in March and told her that I thought I had another hernia but she didn't think so. But I recognized the pain. She referred me to a different surgeon - a civilian this time - and at first he felt my groin area and agreed that it probably wasn't a hernia; he said it was unusual for a woman to get a hernia in that area. But I insisted that it wasn't just a pulled muscle so I had a CAT Scan and that's when he finally agreed that indeed, I had a hernia. He thought it was a femeral hernia as women tend to get them, but he wouldn't know for sure until he operated.

I had surgery April 11th, again, same day procedure. When I was in the recovery room, the doctor visited and said it was an inguinal hernia and he put another mesh patch over it. He told me that the original patch I had didn't cover the area and it had shifted. For all I know, it might have broken but they won't tell me that. I have the dimensions of the mesh from the surgical report but they didn't tell me the make."

Now Cilcia DeMons is going back to the Langley Air Force Base to find out the make of the mesh patch - not an easy task after the fact. Her medical records have to be accessed from last November. If you have surgery, make sure you obtain details of your medical and surgical reports, including the brand of any mesh patch. DeMons's surgical report does not list the make or the manufacturer - make sure you ask the doctor for this information sooner than later, ideally before surgery.