The last thing Cheryl Trotter could possibly imagine after taking one Ketek pill would be complete kidney failure. "One day I was fine, the next day on my deathbed. I went from a slight cough and next thing I know, I'm in the hospital with renal failure - I couldn't believe it," she says. 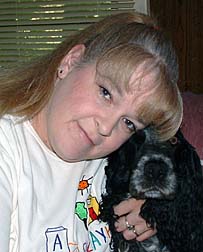 Every spring, Cheryl gets asthma and she has to take an antibiotic and a steroid. But in May 2006, her allergist prescribed something new - Ketek. "I took one pill that night and the following morning I woke up at 5am vomiting in my bed; I couldn't even get to the bathroom - I couldn't walk because the room was rolling, even worse than room-spin. I just had to lie there until my husband came home from work," says Cheryl.

"He took one look at me and drove me to ER - it was a nightmare ride. By the time I got to the hospital I had diarrhea and was vomiting at the same time. Then I started to have difficulty breathing so they did a CAT Scan and tried to get me to walk. Four hours later I still couldn't stand up. They couldn't figure out what was wrong with me so I was just treated for vertigo and sent home. But I did have the wherewithal to take the Ketek pack to the hospital with me; it was the only medication I was taking and they kept it with my medical records.

I took the pills they gave me for motion sickness/vertigo and slept for almost 24 hours. When I woke up everything was still spinning and I was still vomiting - now going on for three days. I was exhausted. Luckily my kids and husband were able to look after me. They called my regular doctor and I got in to see him right away.

He took my vitals and asked me what had happened. I had a urine test and he asked if I was having my period right now as there was a lot of blood in my urine. I went home to wait for the test results - he called a few hours later and told me to go to the hospital asap - they had a room ready for me.

I was scared. At the hospital they went through my medical history - it was quite boring because the only thing wrong with me in my entire life was asthma. The nurse said I was being admitted for renal failure because my kidneys had shut down!

I was in hospital for 10 days. I couldn't even take my asthma medication because they were suspicious of any med, including Ketek, but they wouldn't commit to confirming that this drug was the cause of renal failure. Ketek was the only drug I had taken!

My condition was guarded but gradually, over the next week, my kidney function returned. I still couldn't breathe well (no meds) and had breathing treatments twice a day. They were giving me injections to prevent my blood from clotting. I was so miserable but it was such a relief to go home.

Three days later we all drove to Burger King and my legs felt numb and heavy while I was in the car. I thought I just needed to walk, but I couldn't get out of the car so we drove back home and by this time I couldn't move - it felt like my legs were filled with concrete. My husband and son had to lift and sit me down on the front steps of the house. When the paramedics got to me, they said my feet were ash-colored. I had an IV before I got into the ambulance and soon as I got to the hospital they said I needed emergency surgery for blood clots or I would lose my feet!

I had surgery on my right leg - they pulled out a clot that went from my upper thigh to below my knee. When I came out of surgery, the anesthesiologist said I was a lucky woman - he sucked three liters of foam out of my lungs. When my kidneys failed, everything backed up. If I hadn't had this surgery, I would be dead.

My left leg wasn't quite as bad so they chose to do an angioplasty. It was one day after the surgery on my right leg. It took a few times for them to break up the clots and I had another clot in my left shoulder so I had yet another angioplasty but I was so sore and sensitive that I had to wait another week. This was the worst time of my life.

My husband looked up the side effects of Ketek when I was in the hospital. My doctor wasn't convinced that this drug put me in the hospital but it was too coincidental - I had only taken Ketek before my health spiraled out of control. The nurses knew it was to blame because they told me that other people had suffered the same side effects.

How can drug makers keep Ketek on the market after we read and hear about so many people who have had renal failure like me? You would think this drug is tested under controlled surroundings but I am just a statistic to [Sanofi Aventis] the makers of Ketek when something goes wrong - I don't think there were enough clinical trials.

From what I read, all the people with liver damage had their lives upturned - some of them had transplants. Some people are dying and we are just numbers to the drug company - not mothers or daughters or people with families. Luckily I am a survivor but I am only 46 years old and this had set my health back a few decades.

If you or a loved one have suffered from severe side effects or liver damage while taking Ketek, please contact a [Ketek] lawyer who will evaluate your claim at no charge.
Request Legal Help Now