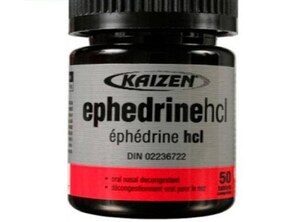 Two days later, the FDA told manufacturers of dietary supplements containing ephedrine that it will publish a rule stating that "dietary supplements containing ephedrine alkaloids present an unreasonable risk of illness or injury. The rule would have the effect of banning the sale of these products as soon as it becomes effective, 60 days after publication."

Kaizen Ephedrine HCL tablets contain ephedrine hydrochloride. Ephedrine and ephedra are names that refer to a substance derived from the plant ephedra, which is a stimulant containing the herbal form of ephedrine. Ephedrine is mostly used for weight loss or as an energy booster, and is also used (and banned) to enhance athletic performance.

Ephedra, the primary ingredient in this product has as its active ingredient ephedrine, a chemical cousin of amphetamine.

So why hasn't the FDA banned this potentially harmful drug? It is regulated under the Federal Food, Drug and Cosmetic Act of 1938 and its safety and effectiveness has to be proven by the manufacturer, not the FDA.

Not surprisingly, The Ephedra Education Council which represents ephedra manufacturers, states on its website that ephreda products are safe if used according to directions.

But testimony from medical professionals agrees with the FDA's conclusions. In the US, manufacturers are marketing ephedra products without any safety testing or FDA approval.