FDA Officials Sued Over Conflicts of Interests Part I

A lawsuit recently filed in a federal court in Ohio against FDA officials on behalf of terminal cancer patients provides a rare window into the inner workings of an agency hijacked by pharmaceutical industry giants and stacked with insiders by President George Bush to guard against any threat to the profits of his top campaign contributors.

The lawsuit's complaint describes a conspiracy orchestrated by top FDA officials to basically drive a small company, Dendreon, out of business with the obvious goal of eliminating competition in what has become a thriving new industry involving the treatment of men with prostate cancer.

The complaint gives the details of a step-by-step plot to sabotage the FDA approval process of Provenge, the first-of-a-kind vaccine that can prolong the lives of men with late-stage cancer. 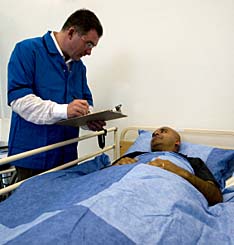 Prostate cancer patients have been waiting for the approval of Provenge for years. The New York Times first reported on a study back on October 29, 2004, the day after Dendreon announced the results that showed that "an experimental vaccine extended the lives of men with advanced prostate cancer."

The findings also were discussed by Dr Eric Small of the University of California at San Francisco in February 2005, at a meeting in Florida that was co-sponsored by the American Society of Clinical Oncology. Here, he presented the study in which Provenge was given to a group of 82 men whose cancer had progressed after surgery and radiation treatment, and a similar group of 45 men who had received a placebo.

After 36 months, the study showed that 34% of the men who received Provenge were still alive compared to only 11% of the group who received a placebo, or a 23% difference.

On February 17, 2005, the Times reported that the 4.5-month increase in survival that was achieved by Provenge is greater than the roughly 2.5-month benefit shown in clinical trials of Taxotere, a drug from Sanofi-Aventis.

"Taxotere is the only approved chemotherapy for patients, like those in the Provenge trial, whose cancer has spread beyond the prostate gland and is no longer being controlled by hormonal therapy," the article said.

Dr Small told the Times that Provenge improved survival for all patients, not just those with less aggressive cancers, and said "the treatment was much less toxic than chemotherapy, with the main side effects being flu-like symptoms that last a short time."

The list of plaintiffs in the lawsuit, first and foremost, includes dying cancer victims, along with their family members and doctors, who are collectively suing as members of a non-profit corporation called CareToLive (CTL).

The plaintiffs allege that "prostate cancer patients are living and dying in Ohio and families and doctors in Ohio want this treatment for their family, friends and patients."

According to the complaint, one doctor has 12 patients waiting for treatment and a John Doe plaintiff "is one of several Ohio prostate cancer patients who may die before he can receive Provenge."

The named defendants in the case include the current FDA Commissioner, Dr Andrew von Eschenbach, and Mike Leavitt, in his supervisory capacity over the FDA as Secretary of the US Department of Health and Human Services.

And let it be noted that the lead defendant, Dr von Eschenbach, became the FDA Commissioner following a two-month stint by Dr Lester Crawford, only because Lester was booted out of office and found guilty of charges that he failed to disclose his own financial ties to companies regulated by the FDA.

The two other named defendants in the CTL lawsuit are Dr Richard Pazdur, the head of the FDA's Office of Oncologic Drug Division, and Dr Howard Scher, chosen by Dr Pazdur to serve on the advisory panel convened to consider the approval of Provenge.

According to the complaint, Dr Pazdur "intentionally violated Federal Regulations" by improperly controlling the make up of the advisory committee and by "applying improper pressure" on panel members and other FDA employees "in an effort to achieve a predetermined outcome of his choosing."

The plaintiffs allege that when Dr Scher was chosen to serve on the panel, he failed to disclose all conflicts of interest and his own personal interests in urging a decision that Provenge not be approved for men dying of cancer and that Dr Scher acted in "a manner that has callously deprived cancer patients access to a safe and effective immunotherapy."

It also should be noted that the legal filings show one lone attorney, Kerry Donahue, of the Dublin, Ohio Bellinger & Donahue law firm, up against a "dream team" of attorneys with unlimited access to tax dollars and the full force of the federal government, which includes US Attorney Gregory Lockhart, Assistant US Attorneys Mark D'Alessandro and John Stark, the Director of the Office of Consumer Litigation, Eugene M. Thirolf, along with Andrew Clarke and Daniel Crane-Hirsch, Trial Attorneys from the Office of Consumer Litigation in the US Department of Justice.

According to the lawsuit, the FDA indicated that there were sufficient data submitted from the clinical trials of Provenge to immediately evaluate the product, so Dendreon filed a Biologics License Application in December 2006, which was granted fast track approval designation in January 2007, establishing May 15, 2007 as the date for an FDA decision.

In a blatant attempt to corrupt the Provenge advisory panel, Dr Scher was granted a waiver even though he is the chief of genitourinary oncology services of the Center for Prostate Cancer, at the Memorial Sloan-Kettering Cancer Center and the Center has a received a grant for a study from a competing company valued at $100,000-$300,000 and he owns stock valued at between $5,000 and $100,000 in a company that competes with Dendreon.

He also serves as an advisory board member to the venture capital fund ProQuest Investments LP. A 1998 document, entitled "The Opportunity in Cancer: Goldberg's Variation" says "Prostate cancer will be the focus of the ProQuest Investment LP, a new venture fund founded by Jeremy Goldberg", and "ProQuest raised $40.5 million in its first closing."

Dr Scher also is listed on some documents as an officer and member of the board of directors of ProQuest.

However, a later May 2000 document discusses the "Start-Up" issue and says, "ProQuest Investments is a $100 million oncology-focused investment fund, partnered by Jeremy Goldberg and Jay Moorin."

Under "Companies", the report lists Dr Scher's "Memorial Sloan-Kettering Cancer Center", among many others, but Dendreon is not one of them.

Dr Scher also is on a scientific advisory board for Novacea and is the co-lead investigator of the company's Asentar Phase III clinical trial of patients in the same stage of prostate cancer as patients who would be treated with Provenge.

Another conflicted panel member chosen by Dr Pazdur, Dr Maha Hussain, a professor at the University of Michigan, was granted a waiver even though she is the principle investigator for a study funded by a competing company and her husband owns stock valued at between $15,000 and $300,000 in three competing companies.

Under Faculty Disclosure Declarations, Dr Hussain is listed as being a consultant to, and an advisory board member of, Novacea and receiving research funding from Sanofi-Aventis, the maker of the chemotherapy drug Taxotere, the only product on the market FDA approved for the treatment of the cancer patients who would benefit from the approval of Provenge.

Dr Scher is also the lead investigator on a clinical trial investigating Taxotere in treating early-stage prostate cancer - a trial that some experts say would be adversely affected by the approval of Provenge.

Another conflicted member, Dr Savio Lau-Ching Woo, a professor of gene and cell medicine at Mount Sinai School of Medicine, was granted a waiver even though an affected company has patented a gene therapy technology that he invented which is being studied in prostate and other cancers and in the last 12 months Dr Woo has received an amount less than $15,000 from the patent.

Although in the end, the industry plants failed to corrupt the decision of the advisory panel, because the committee said Provenge was safe and that the data submitted show "substantial evidence" of efficacy, the efforts to derail its approval continued and on May 8, 2007, the FDA refused to approve the vaccine.

Instead of approval, the agency issued a Complete Response letter that required Dendreon to provide additional data that could take up to 2 years to accumulate. During that time, as many as 60,000 men will die from prostate cancer - many of whom could have benefited from Provenge.

The most blatant evidence of the conspiracy alleged in the lawsuit emerged in a May 30, 2007 press release, when Novacea and industry giant Schering-Plough announced that they had entered into an exclusive worldwide license agreement for the development and commercialization of Asentar and noted that Novacea was currently conducting a large international Phase 3 trial evaluating Asentar in 900 patients with androgen-independent prostate cancer.

Under the terms of the agreement, all total Novacea will receive close to a half a billion dollars.

If you would like legal help regarding this issue, please [send your complaint] to a lawyer for a free claim evaluation with no obligation.
Request Legal Help Now