Kugel Mesh Cause of Death

In 2004 Nancy's mother had surgery for a hernia and was fitted with kugel mesh, ostensibly to minimize pain and hasten her recovery. Instead, the site of her wound became infected, her health deteriorated and she died in May, 2006. Her mother was only 62 years old.

"In November 2004 my mother, Jacqueline, was rushed to ER and had hernia surgery but she had to go back into the hospital on New Year's Eve because the same area was infected," says Nancy R. (She wishes to remain anonymous pending a lawsuit.) "It was really hot and inflamed and I could feel a really hard bump." 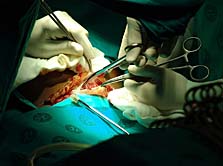 They put Jacqueline on antibiotics. The spot where she had the surgery was oozing so bad she had to put Pamper diapers over it. "Unfortunately my mother had a heart problem so they couldn't go back in - she couldn't take another surgery," says Nancy. She spent almost three months in hospital.

"When she finally went home, her health didn't improve. She had to go back into hospital for minor surgery; they implanted a PIC line so antibiotics could be pumped directly into her bloodstream. She was administering the antibiotics to herself at home but there was a problem with the PIC line and Emergency Medical Services came to her house to try and stop her from bleeding out of the PIC line. All this time, she was cutting up Pampers and using them as dressings. She had to constantly replace them; often her clothes would be soaked from this constant oozing.

She was in and out of the hospital every few months. As well, Jacqueline was seeing the infections doctor, the cardiologist and lung doctor - they were all concerned about this infection but she couldn't have surgery. My mom was soon back in the hospital - she had also developed pneumonia as a consequence of this infection.

The last time she went into the hospital was in March, 2006. She never came out. I received a call from the hospital on Monday morning that she had a staph infection. That afternoon my mother died.

I tried to contact the surgeon that performed the hernia surgery but he never returned my call. Then I was at work one day and one of my co-workers told me about a kugel mesh lawsuit because her husband had surgery and they thought he had kugel mesh. Another co-worker had hernia surgery and she is very scared - I told her what happened to my mother and now she thinks this could happen to her. She wants to know if her mesh is defective - she doesn't want to wait until it becomes infected.

I sure hope this doesn't happen to anyone else - I don't wish this on anyone. It could have been avoided. As soon as my mother had that hernia surgery her health went downhill and she never recovered."