Two lawsuits have been filed against Elidel and Protopic in the Superior Court of New Jersey, law division: Atlantic County. Plaintiffs [Alan and Dayna Thomson] filed a wrongful death suit December 19th, 2006 after their daughter Haley died as a direct result of Elidel. [Ashley McDonald] filed January 31st, 20007 after she was diagnosed with lymphoma, again as a result of Elidel. Both victims were prescribed Elidel to treat eczema. 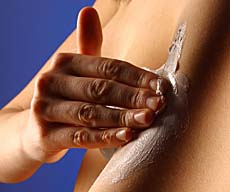 The manufacturer of Elidel, Novartis, has long been in denial regarding the link between its product and cancers and infections; the lawsuit alleges the drug makers knew of the deadly side effects even before it was approved by the FDA. But it wasn't until 2006 that the FDA warned of a cancer risk and added a black box warning to Elidel and Protopic, a similar drug manufactured by Astellas Pharma. It is a warning that came too late for Haley Thomson - she was diagnosed with AML, a form of cancer, on February 25, 2004 and died on December 19th from complications resulting from her AML caused by her exposure to Elidel.

Although she survived, the warning also came too late for Ashley McDonald: at 22 years of age, she was diagnosed with Non-Hodgkin's Lymphoma and underwent three surgeries and four months of chemotherapy.

"We believe Novartis knew of these risks," says Larry Roth, co-counsel for the plaintiffs, "because studies [Novartis] did in order to approve their drug showed incidents of people developing lymphomas and infections, which indicated their immune systems were compromised, particularly in children, from using Elidel."

The lawsuit alleges that, despite Novartis's knowledge of the potentially life-threatening diseases associated with increased use of Elidel, they aggressively marketed and advertised the drug in a false and deceptive manner. They marketed Elidel as safe for human use, had fewer side effects and adverse reactions than other methods of treating eczema, and would not result in a side effect that was potentially fatal. Furthermore, the suit claims that Novartis was aware of the cancer risks associated with Elidel even before they did the first animal trials for the drug application to the FDA!

Prior to the approval of topical preparations of these drugs, (i.e. using it as a cream for skin problems such as eczema), Elidel and Protopic had been approved for use as systemic immunosuppressants in organ transplant recipients; in these patients, treatment had long been known to increase the risk of malignancies and carried appropriate black box warnings. The suit alleges that Novartis was aware, as far back as 2001, of the potential for children to develop 'systemic malignancies.' And the FDA expressed concern to Novartis in December 2001.

In October 2003, a meeting of the Pediatric Subcommittee of the Anti-Infective Drugs Advisory Committee concluded from several studies that Elidel and Protopic may increase the risk of malignancies in young children and a black box warning was recommended. Still, Novartis provided no such warning.

It wasn't until March 2005, after gathering reports of deaths, malignancies and other serious side effects that the FDA required Novartis to add a black box warning to their label. In January 2006, after Novartis and the FDA agreed on the right 'wording', Elidel was finally marketed with the label carrying a warning of malignancy risks.

Protopic and Elidel have been on the market for the last five years and, combined, have been prescribed to 7.5 million people, including children.

Representatives from Novartis Pharmaceuticals Corporation say the drugs are safe based on clinical trials in humans, and can be valuable treatments in managing skin diseases. A written statement from Novartis says, "Novartis is committed to patient safety and Elidel is one of the most thoroughly researched dermatology products in the world."

The Alan Thomson case and the McDonald Case are being handled by lead co-counsel David Buchannan of Seeger Weiss along with co-counsel Larry Roth.

If you or a loved one has suffered serious side effects or cancer from using Elidel or Protopic, please send your story to an [Elidel] or [Protopic] lawyer who will review your claim at no cost or obligation.
Request Legal Help Now