According to testimony at an inquest into the deaths of Roxanne Richardson, 30, and her children, Luke, 3, and Grace, 20 months, an autopsy revealed that at the time of their murders, husband and father-turned-killer, Michael Richardson, had Celexa in his system higher than prescribed which may have caused him to become agitated and irritable. 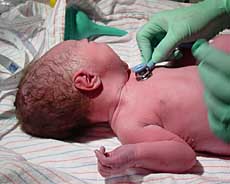 A far cry from alleviating his depression, on the day of the tragedy, while pumped full of Celexa, Mr Richardson wrote in his diary: "I'm hurting so much, nothing matters to me any more except my family and they are getting taken away from me."

Over the past 15 years, there have been a growing number of criminal cases where people have claimed that their aggression and violence was caused by the use of antidepressants like Celexa, a class of drugs known as selective serotonin reuptake inhibitors (SSRIs).

Psychiatrist, Dr Peter Breggin, author of 20 books including, "Toxic Psychiatry," has been researching psychiatric drugs and serving as an expert witness and consultant in civil and criminal cases involving drug companies for more than 25 years.

In 1972, he founded The International Center for the Study of Psychiatry and Psychology (ICSPP), a non-profit research and educational network, focused on the impact of mental health theory and practices upon patient well-being, personal freedom, and family and community values. He also founded the journal, Ethical Human Sciences and Services.

According to Dr Breggin, all SSRIs can produce stimulation or activation with the potential for increased agitation, disinhibition, irritability, aggression, hostility, mania, and crashing into depression and suicide.

"They can also cause a flattening of emotional responses," he notes, "including a loss of caring, that can unleash dangerous actions."

"Beginning with the widespread use of Prozac in the early 1990s," he says, "the struggle to gain public and professional recognition of antidepressant-induced suicide and violence has a long and stormy history. "

The debate peaked in 1994 when Dr Breggin testified against Eli Lilly in a case of Prozac-induced suicide and mass murder by a postal worker in Kentucky.

In the end, when the judge realized what happened, he was outraged and voided the verdict.

According to Dr Breggin, while the FDA and antidepressant makers continue to deny that SSRIs cause violence, many lives continue to come to tragic ends.

It wasn't until late 2004, that the FDA finally made drug companies add a black box warning to the labels of SSRIs about the increased risk of suicide among patients taking the drugs, even though Dr John Abramson MD, author of, "Overdosed America," and a clinical instructor at Harvard Medical School, says the FDA knew about the increased suicide risk since before the drugs were approved.

The findings from a study published in the Archives of General Psychiatry in 2000, he says, evaluating the findings from the "pivotal studies" submitted to the FDA on the 7 new antidepressants approved between 1987 and 1997, including Prozac, Zoloft, Paxil, Effexor, Serzone, Remeron, and Wellbutrin SR, went largely ignored.

In studies that included depressed but not suicidal patients, the completed suicide rate for those taking one of the new antidepressants was 842 in 100,000 per year, or 0.84%, while the rate of suicide for patients taking a placebo was less than half at 360 in 100,000, or 0.36%.

"In other words," Dr Abramson explains, "the pre-approval studies considered by the FDA to be highest quality and most important for these 7 new and supposedly safer and more effective antidepressants showed that treating 1000 depressed non-suicidal patients for one year with the new drugs led to about 5 more successful suicides than if the same group of 1000 patients had been treated with a sugar pill."

"This is an enormously high death rate," he points out.

At the very least, he notes, this possibility should have been studied.

Critics say, getting the FDA to issue warnings about the increased suicide risk with SSRIs was like pulling teeth. According to investigative journalist and author of, "Psyched Out: How Psychiatry Sells Mental Illness and Pushes Pills That Kill," Kelly Patricia O'Meara, "based on the evidence that twice as many children in clinical trials showed a greater risk of suicidality taking the antidepressants, coupled with the evidence that the antidepressants in the majority of the clinical trials were no more effective than sugar pills, the FDA had little choice but to "request" the pharmaceutical companies add the black-box warnings."

Also in 2004, what would become a steady stream of studies showing harm to infants born to mothers taking SSRIs began to emerge.

In February 2004, the study, "Maternal Selective Serotonin Reuptake Inhibitor," by Philip Zeskind PhD and Laura Stephens, in the journal Pediatrics, reported that "first-trimester use of SSRIs has been associated with higher rates minor physical anomalies and miscarriages, thus suggesting possible early effects of SSRI exposure on embryonic development."

In June 2004, a French study published in the journal Prescrire International, reported that newborns exposed to SSRI during pregnancy showed signs of agitation, altered muscle tone, and breathing and suction problems.

The following month, in July 2004, the FDA changed the labeling for all SSRIs, warning that some newborns exposed to SSRIs had developed problems requiring respiratory support, tube feeding and prolonged hospitalizations.

But as it turns out, the FDA had received hundreds of reports of adverse effects in infants born to mothers taking SSRIs over the past decade, according to WebMd. The most common adverse events reported included irritability, trouble eating, body rigidity, and respiratory problems, said Kathleen Phelan, a safety evaluator in the division of drug risk evaluation, to WebMD.

A February 2005 study in the journal, Lancet, screened the World Health Organization's database on SSRI adverse reactions in cases of neonatal convulsions and withdrawal syndrome, and found that by November 2003, there was a total of 93 case reports of maternal SSRI use in babies born with convulsions or withdrawal syndrome.

Research released earlier this year linked SSRI use by mothers during pregnancy to infants born with the life-threatening persistent pulmonary hypertension (PPHN) lung disorder. According to a study by researchers at the University of California, San Diego School of Medicine, in collaboration with Boston University's Slone Epidemiology Center, in the February 9, 2006 New England Journal of Medicine, babies born to women who took SSRIs in the second half of pregnancy, had a 6 times greater risk of developing the lung disorder.

In September 2005, studies conducted by Danish and US researcher determined that SSRI use in the first trimester of pregnancy was linked to a 40% increased risk of birth defects such as cleft palate and that cardiac defects in newborns also appeared to be 60% more likely with women who used SSRIs.

In February 2006, a study conducted in Israel found that one out of 3 infants exposed to SSRIs in the womb showed signs of drug withdrawal at birth, including high-pitched crying, tremors, and a disturbed sleep pattern.

Less than 3 months later, in July 2006, the FDA issued an advisory that warned against taking SSRIs together with triptans, drugs used to treat migraine headaches, because a life-threatening condition called serotonin syndrome may occur. The condition, the FDA said, causes serious changes in how the brain, muscles and digestive system work due to high levels of serotonin in the body.

Last month, doctors at the Cornell Medical Center, in New York, who were treating the two men for infertility, including one who was on Celexa, found that when the men stopped taking the SSRIs, their fertility problems disappeared, only to resume again when they went back on SSRIs.

The problem is believed to be caused by an adverse effect of SSRIs on both the concentration and swimming ability of sperm. The men were tested over a 2-year period

Dr Peter Schlegel, who presented the research at the American Society for Reproductive Medicine conference, in New Orleans, explained that:

"The patients had normal sperm counts and motility before medication. On the medication they have severe deterioration of both. The same patients going on and off medication had the same pattern. It shows a strong association."

Impotence and delayed ejaculation are well-known side-effects of SSRIs, and now Dr Schlegel says he believes that the drugs may be preventing sperm from getting into semen.

"These were men with normal sperm counts that went to nearly zero when they were on these antidepressants but returned to normal when they were off them. It's a dramatic effect and it's never been described before," said Professor Schelgel in the Guardian on October 24, 2006.

"We believe that while it's had a profound effect on these two men," he said, "it could be having a significant but more subtle effect on many more men."

But no matter how many adverse events are found to be associated with SSRIs, there seems to be no way to curtail the over-selling of these drugs to all populations. For the year ending March 31, 2006, Forest Laboratories top selling drugs were the SSRIs, Celexa and Lexapro, which when combined, accounted for 68% of the drug maker's sales.

However, there may be a few dents in the company's profit margin for SSRIs in the coming years because according to Forest Lab's Annual Report filed with the SEC on June 14, 2006, the company is a named defendant in approximately 25 active product liability lawsuits, with most alleging that Celexa or Lexapro caused or contributed to persons committing or attempting suicide.

In addition, Forest Labs may not know it yet, but the company will soon be hit with the first Celexa-related birth defect lawsuit alleging that the company engaged in "repeated and persistent fraud" by misrepresenting, concealing and otherwise failing to disclose, information concerning the safety and effectiveness of Celexa in treating pregnant women.

Named plaintiffs in the case will be Lacee Shore, who was prescribed Celexa during her first trimester of pregnancy and her baby Gavin Shore, who was born with heart birth defects. Attorney, Robert Kwok, of the Houston, Texas lawfirm Robert Kwok & Associates, LLP, is handling the case.

To cover lawsuits, according to Forest's Annual Report, the company maintains $140 million of product liability insurance coverage per "occurrence" and in the aggregate.

However, in conclusion the Report points out that, "litigation is subject to many factors which are difficult to predict and there can be no assurance that we will not incur material costs in the resolution of these matters."
READ MORE ABOUT Drugs/Medical

If your child was born with PPHN and the mother took the SSRI Celexa while pregnant, please contact a [Celexa] lawyer who will evaluate your claim at no charge.
Request Legal Help Now