About one in every four American adults has high blood pressure which is a major risk factor for heart and kidney disease, as well as stroke and heart failure, but often occurs with no warning signs.

Blood pressure is the force of blood pushing against blood vessel walls. The heart pumps blood into the arteries which carry the blood throughout the body. High blood pressure makes the heart work harder to pump blood and contributes to hardening of the arteries or atherosclerosis, according to WebMD. 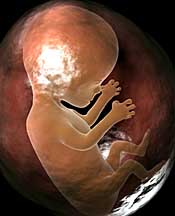 Chronic heart failure is a debilitating condition in which the heart's ability to pump blood is impaired. Patients with heart failure experience a continuing decline in their health, resulting in an increased frequency of hospitalization and in premature death.

There are often no symptoms in people with hypertension. In fact, according to WebMD, nearly one-third of those who have the condition do not know it. The only way to know for certain whether hypertension is present, is to be tested.

One in four pregnant women with chronic high blood pressure develops preeclampsia. In addition to increased blood pressure and protein in the urine, hand and facial swelling, sudden weight gain, persistent headaches, blurred vision, dizziness and abdominal pain, may also occur in women with the condition.

In pregnant women, high blood pressure can also decrease the blood flow to the placenta, which affects the supply of oxygen and nutrients to the fetus and increases the risk of preterm delivery.

Persistent high pressure can damage the smaller blood vessels that transport blood to and from the cells and tissues, including the tissues of the heart, lungs, brain, kidneys, liver, and the uterus.

A common class of medications used to treat high blood pressure are ACE inhibitors (angiotensin converting enzyme inhibitors). These drugs arrived on the market about 25 years ago, and they are currently the second most commonly prescribed class of drugs in the US.

The drugs act by inhibiting the production of angiotensin II, a substance that both induces constriction of blood vessels and retention of sodium, which leads to water retention, and an increased blood volume.

According to WebMD, ACE inhibitors dilate blood vessels to improve the amount of blood the heart pumps and lower blood pressure. They also help decrease the amount of work the heart has to do and protect the kidneys from the effects of hypertension and diabetes. Examples of ACE inhibitors include:Numerous studies have shown that ACE inhibitors can have adverse effects on the developing fetus, and for years, experts have said they should not be prescribed to pregnant women.

The most recent study documenting their harm to the fetus was conducted by researchers from Vanderbilt University, and published in the June 8, 2006, New England Journal of Medicine. The study found that fetal exposure to ACE inhibitors in the first trimester of pregnancy nearly tripled the risk of serious birth defects.

According to the research, one-third of the birth defects identified in newborns born to women who were prescribed ACE inhibitors in the first trimester, involved the heart, one-quarter involved the limbs or face, and one-tenth of the defects involved the brain or spinal cord.

In the study, the researchers examined pharmacy records and data from the Tennessee Medicaid database for the years between 1985 and 2000, which allowed them to review records of ACE inhibitors prescribed for women during the first trimester as well as infant outcomes.

In reaching their results, the researchers compared newborns exposed to ACE inhibitors with a cohort of infants whose mothers received other high blood pressure drugs in the first trimester, and a group of newborns who were not exposed to any hypertension medications.

Some experts expressed alarm at finding such serious adverse events in a study on drugs that have already been on the market for a quarter of a century. In an editorial accompanying the study in JAMA, Dr J M Friedman, MD, PhD, from the University of British Columbia in Vancouver, Canada, said more research on the teratogenic potential of ACE inhibitors in pregnancy is called for.

"This is not the last word on the subject," he wrote, "but it is shocking to realize that it is almost the first."

"Birth defects caused by teratogenic treatments are preventable," Dr Friedman states, "and babies and their mothers are being harmed unnecessarily because we do not know enough about which treatments to use and which to avoid."

"Further study is needed to determine the precise risk and its relationship to individual drugs," he advises, "but the increase appears to be great enough to require discussion with all women of reproductive age who are prescribed ACE inhibitors."

"Detailed fetal ultrasonography and echocardiography at about 18 weeks of gestation," he says, "should be offered to women who have taken such drugs in the first trimester of pregnancy."

"A woman who learns she is pregnant while taking an ACE inhibitor," he warns, "should immediately be switched to another antihypertensive agent to minimize the risk of fetopathy."

But the findings of this study are not actually new. A surveillance study in 2002, of Michigan Medicaid recipients involving 86 newborns exposed to captopril during the first trimester found 4 newborns (4.7%) had major birth defects, including one cardiovascular anomaly, one polydactyly, one limb reduction defect, and one hypospadias.

In addition, ACE inhibitors have long been associated with serious birth defects in infants born to mothers who used the drugs during the second and third trimester of pregnancy. Back on March 13, 1992, the FDA announced that all ACE inhibitors, "will be required to carry a "boxed warning" on the label for women in the advanced stages of pregnancy."

"At the agency's request," the FDA said in a press release, "six pharmaceutical companies are simultaneously sending out a "Dear Doctor" letter emphasizing that women who take the drug in the second and third trimesters of pregnancy are running the risk of causing significant harm to fetuses, including kidney failure and face or skull deformities."

For several years before that announcement, the labeling on ACE inhibitors had warned about the dangers of their use by pregnant women, but nonetheless, additional cases of birth defects continued to be reported. "More than 50 cases of fetal harm have been reported over the past several years," the FDA stated.

"The warnings in the labeling," its press release stated, "are therefore being strengthened by including a boxed warning and other changes."

At the time, pharmacists were also alerted to the label changes and were provided stickers to paste on ACE inhibitor prescription bottles that read, "If you become pregnant consult your doctor promptly about switching to a different drug."

Critics say that in light of all the previous studies, the use of ACE inhibitors with pregnant women should have ended long before the latest Vanderbilt study. Clearly, they say, resistance to the use of other hypertension drugs stems from the heavy promotion of ACE inhibitors to prescribing physicians.

For instance, diuretics and beta-blockers are recommended as the first-line of treatment for uncomplicated hypertension by the Joint National Commission on High Blood Pressure Treatment, yet a survey conducted on 1,700 primary care doctors, published in the December 2003, Journal of General Internal Medicine, showed that doctors believed that diuretics were less effective, and that beta-blockers had more side effects than calcium channel blockers and ACE inhibitors.

In addition, the survey found that doctors who favored prescribing the more expensive medications were more likely to pass out free drug samples provided by pharmaceutical sales representatives. Patients diagnosed with hypertension become life-long customers for Big Pharma and critics say sales reps will use whatever means necessary to lock in a new patient.

"These new, more expensive medications are being more heavily promoted by the drug companies, and one way or another that information influences how people perceive the drug's effectiveness," according to the Journal's study author, Peter Ubel, MD, associate professor of internal medicine at University of Michigan Medical School.

Critics say there is a huge incentive for drug companies to convince doctors to prescribe ACE inhibitors instead of the more effective hypertension drugs that sell for fraction of the cost. According to IMS Health, a pharmaceutical information tracking firm, in 2005, sales of ACE inhibitors brought in more than $3.8 billion.

If you were taking an ACE inhibitor and your baby wasw born with a birth defect, please contact an [ACE Inhibitors] lawyer who will evaluate your claim at no charge.
Request Legal Help Now