More drug News
The Food and Drug Administration (FDA) has said it is investigating some 775 reports of serious side effects associated with 50 over-the-counter children's medicines made by McNeil, a division of Johnson & Johnson, which were recalled earlier this month due to quality and safety issues. Among the adverse events are reports of seven deaths since May 1, when the recall was issued. 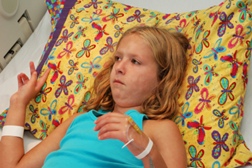 This is the fourth recall in the past seven months. According to a report on CNN.com, the previous three recalls occurred in November 2009. Five lots of Tylenol Arthritis Pain 100 count with the EZ-open cap were recalled for unusual odor leading to nausea, stomach pain, vomiting and diarrhea.

In December the recall was expanded to include all product lots of Tylenol Arthritis Pain caplet 100 count bottles with the red EZ-open cap. And in January 2010, the recall was widened to an undisclosed number of Tylenol, Motrin and other over-the-counter drugs after consumers complained of feeling sick from an odor.

A hearing into the latest recall is scheduled for May 27 and will be conducted by the House Committee on Oversight and Government Reform.

Posted by
Brinda Houchins
on March 3, 2015
It took me about 4-5 days to actually figure out what was causing severe stomach pain and vomiting.