Gadolinium Can Make MRIs Hazardous to Your Health.

Magnetic resonance imaging, known more commonly as an MRI, is one of the super tools of modern medicine. It provides doctors with a detailed picture of what's going on deep inside a patient's body. However, there is evidence to show that one of the chemical agents used to produce MRI can be extremely toxic to people with kidney disease. 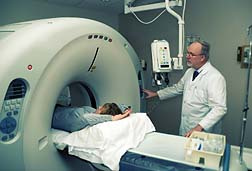 In May of 2006, the US Food and Drug Administration (FDA) issued a public advisory warning about a possible link between exposure to contrast agents containing a chemical called gadolinium and Nephrogenic Systemic Fibrosis or Nephrogenic Fibrosing Dermopathy (NSF/NFD). It is characterized by restricted movement of joints that eventually lead to life in a wheelchair or even death.

"The reason we are talking about renal failure patients is because this contrast agent is excreted exclusively through the kidneys," says attorney Peter Brodhead. "People with healthy kidneys would excrete the chemicals in a couple of hours. But in a renal failure patient the time the agent is in the body can be 20 times as long."

Brodhead, a partner at the legal firm of Spangenberg, Shibley & Liber in Cleveland Ohio, is currently handling litigation against the manufacturers of the gadolinium agents. Brodhead's firm has about 25 cases related to gadolinium side effects and MRIs. He is also serving as the plaintiffs' liaison counsel for the Multi District Litigation (MDL).

"There is a cascade of medical literature that makes it clear that the use of linear gadolinium based agents is the common thread for the patients that get this condition and the epidemiology is getting very strong in this regard," says Brodhead.

More Gadolinium-MRI News
Defendants in the MDL are GE Healthcare, Bayer HealthCare Pharmaceuticals, Tyco/Mallinckrodt and Bracco Diagnostics. All deny liability, but the plaintiffs allege in the some 400 suits already filed that the manufacturers failed to warn about the dangers of gadolinium based agents in MRIs.

It is expected that the litigation will go forward sometime in early 2009, with the cases of the most severely injured plaintiffs going ahead first in the MDL centered in Brodhead's home town of Cleveland.

The science around the litigation is extremely complex, but Brodhead, whose firm focuses on product liability and medical malpractice, has become a studied expert in the area of gadolinium and Magnetic Resonance Imaging as he continues to prepare for the showdown with manufacturers.

Peter Brodhead is a partner with Spangenberg, Shibley & Liber. He is a graduate of Cleveland-Marshall College of Law (1979). Peter Brodhead was voted among The Best Lawyers in America by his peers in the Personal Injury Litigation practice area for 2009.