Guidant Should Be Held to Greater Accountability

On April 27 Federal Judge Donald W. Frank of the US District Court in Minnesota rejected a plea agreement between the Justice Department and Guidant Corporation over the sale of potentially defective heart defibrillators. Guidant, which was acquired by Boston Scientific soon after the defective medical device issue emerged, agreed to plead guilty to two misdemeanors and pay what has been described as the largest fine levied against a medical devices manufacturer: $296 million. 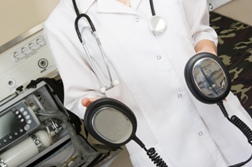 While the feds touted the plea deal as demonstrative of the Justice Department's renewed commitment to chasing and getting tough on corporate crime, the federal judge ruled that the deal was not tough enough. According to the New York Times, Judge Frank rejected the deal on Tuesday on the grounds that the arrangement did not hold the manufacturer sufficiently accountable for its actions.

It was disclosed in 2005 that Guidant failed to notify doctors and their patients that some of its defibrillators could fail at the critical moment that an erratic heart rhythm needed correcting.

At least six individuals who were in receipt of the flawed devices did not survive.

Following a prior hearing, a host of doctors and their patients objected to the plea deal—notably Drs. Robert G. Houser and Barry J. Maron, the two men who were responsible for blowing the whistle on the problematic medical devices. While laying criminal charges against former Guidant executives was not within the jurisdiction of the court, Judge Frank agreed with Hauser and Maron that the Justice Department's arrangement with the defendant did not sufficiently hold them accountable.

In rejecting the deal, the judge said that prosecutors should have sought probation for Guidant and its parent, Boston Scientific. Probation would require the companies to take certain steps, such as rebuilding public confidence in the safety of heart devices, in addition to a fine.

More MEDICAL DEVICES News
The judge also outlined other provisions that might be suitable in a new plea deal. Charitable activities by Guidant to improve heart device safety and improve medical care among minority patients were cited as examples.

According to the New York Times on 4/27/10, prosecutors charged in court papers that Guidant had knowingly sold potentially flawed defibrillators. Yet in spite of the Justice Department's stated "get-tough" stance, there was no mention of it in the plea agreement.

The conditions of the deal were "not in the best interest of justice and do not serve the public's interest because they do not adequately address Guidant's history and the criminal conduct at issue," the judge said.

"The interests of justice are not served by allowing a company to avoid probation simply by changing their corporate form. The court believes that a period of probation would likely benefit, rather than harm, Guidant and Boston Scientific's public image."