How well do Vytorin and Zetia work? According to a new study released today, possibly not at all. Doctors are now questioning whether these two blockbuster cholesterol drugs should even be prescribed. 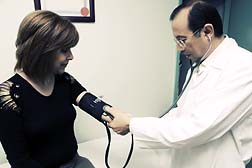 This new study found that ezetimibe, the active ingredient in both Vytorin and Zetia, is significantly less effective at reducing artery plaque in eight months than is the prescription version of niacin, a drug that has been on the market in different forms for 50 years.

According to the study, Zetia failed to reduce artery wall build-ups that a rival drug, Niaspan, shrank considerably. Patients in the ezetimibe group also suffered more heart attacks and other major heart problems than those in the niacin group. The lead author of the study, Allen Taylor of the Washington (DC) Hospital Center, said the numbers were too small to draw conclusions. "Niacin has been around for 50 years," said Taylor. "It's a well-understood drug, and in this trial it was a clear superior choice."

The findings were released at an American Heart Association meeting and published online by the New England Journal of Medicine. A study published a year earlier showed that Vytorin, a combination of ezetimibe and cholesterol-lowering simvastatin, worked no better than simvastatin alone.

More Drugs News
Securities and Exchange Commission documents show that taken together, the studies dealt a huge blow to Vytorin and Zetia, which have earned sales of roughly $21 billion worldwide since 2003. Vytorin is a pill that combines Zetia with a statin. Both are sold by Merck & Co. of Whitehouse Station, N.J. Niaspan is made by North Chicago, IL-based Abbott Laboratories. All three of these drugs cost between $3 and $4 a day, though niacin has been sold as a cheap generic for decades.

Last year, a large study found Vytorin was no more effective than Zocor, a statin now available as a generic for a fraction of Vytorin's cost. In August, Merck and Schering-Plough agreed to pay $41.5 million to settle lawsuits charging that they delayed releasing the unfavorable results of studies for fear of hurting drug sales.

Posted by
David Matthews
on January 31, 2013
I Joined The Lawsuit Against Zetia And Vytorin Has It Been Settled And How Much Money Do We Get Back If Any?