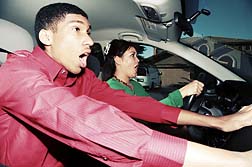 The recalled vehicles may have been assembled with an improperly-formed booster input rod retaining clip—assuming the part in question was installed at all. The NHTSA says the clip could be missing completely. The missing or defective part could cause the push rod to become detached from the brake pad assembly, resulting in brake failure.

The recall affects 2010 models of the Chrysler Sebring, Dodge Avenger, Dodge Nitro, Jeep Commander, Jeep Grand Cherokee and Jeep Liberty, together with 2009 and 2010 models of the Dodge Ram pickup. Chrysler has agreed to replace faulty or missing clips free of charge on behalf of owners registered to the affected vehicles.

The recall impacts some 24,177 vehicles.

The New York Times revealed Tuesday evening that Chrysler discovered the problem during routine quality inspections. The manufacturer says it has received no complaints from owners of the recalled vehicles.

There was no mention in the recall notice as to where the part in question was made, how it became malformed, or why vehicles were allowed to roll off the assembly line without the clip.

As a result of the discovery, affected assembly plants have held back new vehicles and are repairing them as required before releasing them to the general public.

Chrysler said it would notify owners of the affected vehicles this month.

The Chrysler and Dodge recalls come at a pivotal moment in the manufacturer's history. Still recovering from the financial setbacks that drove it into bankruptcy—its recovery due in no small part to a government bailout and financial restructuring—Chrysler LLC is attempting to woo consumers back to the showroom with quality products. From the context of public relations, the brake recall couldn't have come at a worse time.