The Supreme Court will soon be back to tackle a discrimination case that is based on race. This time the justices will decide whether the University of Texas' admission policies violate the rights of white applicants. 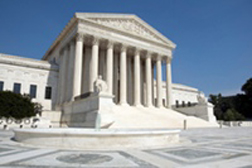 In 2001, the Grutter v. Bollinger case from the University of Michigan's Law School was deemed unconstitutional by the US District Court because they "clearly consider" race and are "practically indistinguishable from a quota system" regarding their admissions policy. But in 2003, the Supreme Court held that the United States Constitution "does not prohibit the law school's narrowly tailored use of race in admissions decisions to further a compelling interest in obtaining the educational benefits that flow from a diverse student body."

Four conservative judges found the university's policies to be unconstitutional, among them Justice Clarence Thomas. He said that "The Law School, of its own choosing, and for its own purposes, maintains an exclusionary admissions system that it knows produces racially disproportionate results. Racial discrimination is not a permissible solution to the self-inflicted wounds of this elitist admissions policy."

Since the Supreme Court's decision, the University of Texas—along with many other universities—has considered race with enrollment, with the intent of increasing student body diversity. (Not all universities are of like minds. Some states such as California disallow racial considerations when it comes to admissions, despite the Supreme Court ruling.)

In 2003, the court's opinion read that "race-conscious admissions policies must be limited in time” and that time would probably be "25 years from now."

Abigail Noel Fisher, a white student who was denied admission to the University of Texas flagship campus, filed a lawsuit with another female student (who subsequently dropped the case), claiming the school's race-conscious policy violated their civil and constitutional rights. Both women ended up enrolling in different schools.

The Project on Fair Representation is backing Fisher. The organization opposes college admissions that are based on race or ethnicity and they are helping Fisher with her legal costs. Edward Blum, the group's director, said that "This case presents the Court with an opportunity to clarify the boundaries of race preferences in higher education or even reconsider whether race should be permitted at all under the Constitution's guarantee of equal protection."

Posted by
Sheila R
on March 4, 2012
I can see this happening in my own life. I am an adult learner that is denied MANY opportunities because of my age, race, gender, etc. It is sad that the world has to fit in these tidy little categories in order to get an education. Most schools for adult learners in the Chicago Area will educate you, as long as you overpay for it.