The Digitek recall has gone to the dogs—literally. That's what happened when Georgia Vonk got the call from her pharmacist that Bailey P. Vonk's Digitek heart medication had been recalled for adverse reactions including nausea, vomiting, low blood pressure, cardiac instability, and even death.

In a dog, it can also cause gagging. Bailey P. Vonk is a four-year-old Neapolitan mastiff with a history of heart problems. Needless to say, Digitek digoxin tablets are often prescribed to pets by their veterinarians. "I thank God my dog's okay," says Vonk, a catering manager from Sun City. "But I'm worried about the people who take this drug." 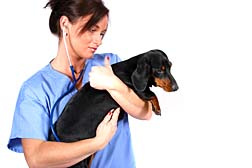 Indeed. While it is still unknown how the Digitek dioxin defect actually happened, there is concern that the recent recall of double-strength Digitek dioxin tablets by Actavis may not be reaching those affected, allowing Digitek users to continue using the product to their peril, posing the risk for adverse reactions

Digitek is the generic version of a drug commonly taken by seniors, and others suffering from heart problems and abnormal heart rhythms. Actavis manufactures Digitek on behalf of Mylan Pharmaceuticals and UDL Laboratories, which distribute the drug, and while available at pharmacies, many users of Digitek obtain their medication via mail order.

There is concern that the Class 1 recall, undertaken in concert with the US Food and Drug Association (FDA), is not getting through, and the message is not being heard.

The recall concerns what is believed to be a manufacturing defect inherent with some of the Digitek tablets. It has been determined that some of the tablets are twice the thickness as normal, and therefore contain twice the approved dose of digoxin. It is almost as if, for whatever reason, two tablets were pushed together as one during the manufacturing process. While it would be easy to tell the difference were one to empty the bottle and look at all of the contents together for comparison, the concern is that most people don't do this: tablets are dispensed and taken one at a time, and Digitek users could be forgiven for not noticing the difference in size.

They wouldn't know until ingesting an oversized tablet, and suffering from the ill effects of digoxin poisoning. Adverse reactions such as nausea and vomiting is uncomfortable even for the young and strong, but one can imagine the discomfort, or even panic if such symptoms befall a senior living alone. Low blood pressure can prove dangerous. Worse still, were a number of oversized tablets to be consumed in succession, digoxin poisoning can lead to heart failure and death.

According to the manufacturer, there have been 11 adverse reaction reports thus far and no deaths reported directly linked to the oversized Digitek tablets. However, lawyers have reportedly spoken to the families of several individuals who have died while taking Digitek digoxin tablets, and who reportedly presented symptoms consistent with digoxin poisoning before they passed away.

Thus, this is serious business. And this isn't the first time that Activas has been under FDA scrutiny. According to an FDA warning letter dating back to 2006, an inspection between January and February of that year revealed six potentially serious adverse drug events dating back to 1999 concerning products such as digoxin, that were not reported to the agency.

More News
A Class 1 recall dictates that customers are required to return the product in question to pharmacists. However, there appears to be little promotion or advertising of the recall on behalf of the manufacturer. That puts the onus on pharmacists to contact their customers. What isn't known is how mail-order customers, and those who buy from major big-box stores such as Wal-Mart, Target or Costco, will be notified.

Digitek digoxin tablets are made by Actavis Totowa LLC for Mylan and UDL, and are sold under the UDL and Bertek labels. Digitek is the generic form of Lanoxin, which costs more but could be a worthy alternative until the Digitek situation gets sorted out.
The downside is that many health insurers, together with many consumers, have not been apprised of the recall and remain unaware of the issue, and will therefore only cover the generic.

Meantime, various lawsuits are already in the works on behalf of those who have been harmed, or whose deaths have been hastened, by the use of the oversized Digitek digoxin tablets. The first lawsuits were launched literally two weeks after the April 25th recall.