Kathy's mother had taken Digitek for years and was in fairly good shape. But this past April she went downhill, fast. Kathy thought it was just her age, but from her symptoms, the doctor in ER knew right away that Marilyn was suffering from Digitalis toxicity.

A few months before her mother was hospitalized, Kathy noticed that she had lost her appetite and was very weak. Then she had a stroke, and Kathy now believes it was related to the double-dose Digitek. "Marilyn [her mother] had fallen down on several occasions but blamed it on stumbling over things," says Kathy. "Then around the end of April my husband found her on the floor in the bathroom—she had gotten so weak. My mom said that she was OK but I insisted that she go to ER. 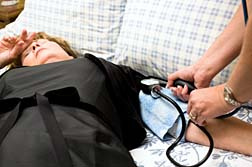 Fortunately, she saw a doctor who knew about Digitalis toxicity and from mom's symptoms the doctor suspected that Digitek was to blame. The doctor asked her questions about her color perception (which was off) and her heart rate was low. (This happened just one day before hearing about the recall.)

At that time she was fairly lucid but as the day progressed she got more and more out of it. She was admitted with a diagnosis of excessive digitalis in her system. And she was also diagnosed with pneumonia; again, the doctor said it was a result of aggravated vomit that in turn was caused by the Digitalis toxicity.

They gave her IV potassium—her potassium level was so depleted and at a dangerous level, again as a result of double dose Digitek. My mom spent the next three days in and out of lucidity; she was so weak she couldn't get out of bed, and was forced to wear a diaper and lay in her own excrement. This was very difficult because she is normally a very fastidious person.

She was in and out of reality, having hallucinations. And she looked like a skeleton; her skin was waxy and she was just skin and bones. The worst day was Wednesday—in one of her more lucid moments she told my brother that she wanted to 'throw in the towel' because death was preferable over the way she was feeling.

On Thursday, we got a phone call from a pharmacist at her mail-order pharmacy, telling us about the Digitek recall. When we told the pharmacist that she was in hospital, he told us to contact the FDA immediately. We did so and then we called her primary care physician. I wondered why her physician didn't know about the recall and why my mom wasn't tested each month; my friend's father was taking the same medication but a lower dose and he was tested monthly...

My mom was taking one pill a day; we have no idea how many pills she took that were double the dosage. When she got to the hospital, she was taken off the drug immediately, no gradual withdrawal. She was prescribed a different digitalis, from a different manufacturer.

More DIGITEK RECALL News
The good news is that she has improved. She was in a rest home convalescing for three weeks but is now back home with me. Her appetite is coming back and she is putting on weight. Thank god it didn't kill her. And thank god she didn't take any more double dose Digitek.

I heard that the drug company knew about this problem a while back but took so long to get the information out there. I'd like to comment on the drug company but it can't be printed. We are so frustrated; to watch someone you love suffer so much is very difficult. My mother had a few health issues before she was admitted to hospital, but was able to get around on her own. Now she has to use a walker. Even thought she is improving, there's a long road ahead.

I'm glad to have the opportunity to talk about my mother and how Digitek almost killed her, because the more people who know about this the better."