Digitek Recall: Your Pharmacist will Call

Just weeks after Actavis, in conjunction with the FDA initiated a recall of its heart drug Digitek (digoxin tablets), a lawsuit was filed on May 5, 2008 in the northern district of Ohio and a class action lawsuit was filed in the eastern district of Louisiana. The suits follow a voluntary recall of all Digitek lots after reports that tablets of twice the approved strength were issued in the US. 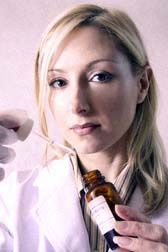 Digitek is used to treat heart failure and abnormal heart rhythms. According to the FDA, The existence of double strength tablets poses a risk of digitalis toxicity in patients with renal failure. Digitalis toxicity can cause nausea, vomiting, dizziness, low blood pressure, cardiac instability and bradycardia. Death can also result from excessive Digitalis intake. Several reports of illnesses and injuries have been received.

Currently, it appears that the Icelandic generic drug maker Actavis Totowa (formerly known as Amide Pharmaceutical, Inc), isn't doing much to notify the public. "Primarily we are finding that Digitex patients are learning about the recall from the pharmacists — not the best method of notification," says Ledgard. "In some cases doctors are sending letters to their patients but the company did not run an ad in the paper and had nothing on TV — which would be the best way of notification… At this point I don't know why the company isn't doing more: perhaps they don't think the problem is that serious."

Double-strength tablets could lead to toxic levels of digitalis in patients with renal failure. Too much digoxin can make you nauseous, depress your blood pressure, slow down your heart rate or kill you.

If the company isn't notifying patients, pharmacists are probably the best means to reach customers regarding their prescriptions. "They don't want to be held liable for not notifying their customers," adds Ledgard. But Digitek is widely used by mail-order medication businesses as well as large retailers such as Wal-Mart, Target and Costco. Who will notify those customers?

The Class I recall requires patients to return their current Digitek supply to the drugstore "That means the recall goes down to the consumer level," says Tom Nelson, owner of Pucci's Leader Pharmacy in midtown Sacramento. "Quite often, recalls are at the pharmacist level, but we're not required to recall what's already been dispensed to patients."

Veterinarians may want to notify their patients about the recall — Digitek is the biggest seller to treat congestive heart failure in pets as well as humans.

There is much confusion about the Digitek recall due to lack of information. People are are asking in on-line chat rooms where these pills were manufactured (China?) and complaints on blogs are rampant, such as this from "Lonely in Wisconsin":

My husband was taking Digoxin before, during, and after his cancer treatments in 2006/2007. Last November after three months of strange symptoms and doctors not finding a cause, he was finally diagnosed (by doctor number 11) with digitalis toxicity. His weight was down to 125 lbs, was suffering dizziness, confusion, and mental awareness problems. After taking him off the digoxin, he regained mental capabilities, gained some weight back, but he never really recovered from this toxicity. He passed away March 31, 2008. Did this drug kill him? Probably not. Was it contributory in hastening his death? I believe it did."

Actavis Totowa has recalled all lots of Bertek and UDL Laboratories Digitek (digoxin tablets, USP) "as a precaution".

Digitek is distributed in the Unites States by domestic generic company Mylan Inc.

Plaintiffs are seeking damages over alleged injuries and ask that potential future medical expenses be covered by Actavis.