At first, Jack thought he was suffering from pneumonia but he was diagnosed with congestive heart failure and started taking Digitek in hospital. Luckily for Jack, his cardiologist took him off the medication months before the Digitek recall but his friend suffered loss of vision in one eye—permanently.

Jack says he was treated for high blood pressure before going into hospital: up until that time he had a clean bill of health. During his 4 days in hospital, he had a stress test, booked an appointment to see a cardiologist and was given Digitek for his heart problems. 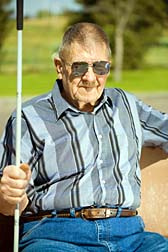 "As soon as I got home, I started feeling better," says Jack. "I had taken Digitek for two months—beginning January 23, 2007-- before I saw the cardiologist. He took me off Digitek right away (I don't know why—maybe because I had previously had a heart attack) and prescribed a whole new regimen of meds.

I had no side effects from the Digitek but the reason I submitted my name to LawyersandSettlements is because my friend suffered blindness from taking Digitek; he went blind in one eye almost overnight. He was on Digitek right up until early this summer and the double dose Digitek was recalled in April, 2008. He had received a call from his pharmacist asking him to bring the medication back and exchange it for an alternative med, which he did. We are casual friends so I don't know much more information, just that he went to the hospital with this eye problem.

At the time I didn't know he was taking Digitek. Apparently the vision problems started with shadows but he couldn't get an appointment with his primary physician right away; it just got worse within a week. By the time he saw a doctor the news was very bad: he was blind in one eye and nothing could be done: he left the doctor's office without a prescription.

His eye looks perfectly normal, no outward appearance of blindness. But now he is worried about the other eye. We talked about the Digitek recall: we are Rotarians and talk at our weekly meetings. At our initial conversation, after he lost his vision, the guys were teasing him that Viagra could have been the cause but he denied using it--that is when he talked to me about Digitek because he remembered that I was in hospital for heart failure.

More DIGITEK News
He found a lawyer and suggested I do the same, since I had also taken Digitek. My friend is a low-key type of guy and doesn't seem too angry—I know that I would be. When he came to the rotary meeting after the doctor's appointment he seemed calm, I would have been frantic. But he is worried about his future, will he go completely blind? He is recently retired and has a lot of life in him. I think it is tragic.

I believe I was lucky that I didn't suffer any side effects; I was lucky that the cardiologist took me off this drug in time. I really feel sorry for my friend; when his problems started he had no concept that it had to do with his medication; the doctors gave him three reasons that could have caused it and one was a viral infection; they also said it could happen to the other eye: not one doctor clued in that it was Digitek.