"My Wife Died from taking the Recalled Digitek"

Last December, Robert's wife was hospitalized for an irregular heart beat; she had a cardioverter-defibrillator (ICD) implanted and started taking the Digitek heart drug. "Carole took Digitek 3 times a week but she started having problems right away," says Robert. "I know that her last batch of heart meds was part of the Digitek recall because I still have the bottle and batch number." 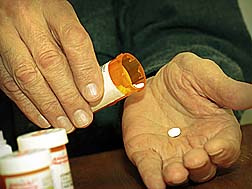 "Carole was dizzy and nauseated and she lost her appetite," says Robert. "She was tired all the time and then became delusional, seeing things that weren't there. I think being delusional caused her to lose her equilibrium and she fell down a few times.

On May 13, just a few weeks before she died, Carole fractured her hip bone and I took her back to the hospital. By this time the doctors were really familiar with her—she had been to emergency 8 times because of these symptoms and they ran all kinds of tests including an EKG, the works. But each time they just sent her home, where she would continue with these same symptoms. My wife was throwing up so much and not eating that she went from 125 lbs to 89 lbs.

Anyway, this last time they decided to keep her overnight for observation because she was so delusional and nauseated, and her blood pressure was low. In the meantime, her doctor had cut back the Digitek to one pill a week. I don't know why she was taking only one pill but I do know that her digitalis toxicity level was .02 and a normal level is .06.

The next morning I was getting ready to visit her in the hospital and the doctor called; he told me she passed away. Every time I talk about this I lose it…

Carole's death floored me. If I had known this was going to happen I would have stayed with her all night. They had kept her overnight just for observation and I went home after kissing her goodnight. If I knew she was in such critical condition, I would never have left her side.

I got her hospital records and just sent them to the lawyer. Just to give you an idea on the length, at least 200 pages, it cost $38 to mail them and that is just medical records from the hospital, not counting records from her cardiologist and primary care physician.

I know in my heart it had to be the Digitek that killed her. I still have her last prescription in my possession and the lot numbers are the same as the double strength recalled Digitek. I first found out about the recall by a letter from our pharmacist in early March; it also gave the phone number of a company that was handling the recall for Actavis Totowa - makers of Digitek. I phoned and they wanted me to send the pills back to them and they would reimburse me for the prescription but I refused.

More DIGITEK News
About 60 pills are left in this bottle so Carole took 40 of the recalled Digitek pills. Her problems didn't really start until she was given the Digitek and I talked to my doctor about this, that Digitek was the cause of her death, but I think he got scared that I was going to sue him. He said her levels were not out of line but he was afraid of a malpractice suit.

Her cause of death was listed as cardiac arrest, coronary artery disease and hypertension. In retrospect, I wish they performed an autopsy. I didn't put two and two together that she died due to digitalis toxicity so we had the body cremated. I have her ashes on the mantle in the living room so she is close to me. Carole was only 69 years old and we were married 54 years; that is a long time to spend with somebody. I know she had more years to be with me if it wasn't for the damn Digitek."