In 1990, attorney and former marathon runner Michael Rikon developed a heart problem and he started taking Digitek. He had a cardiac arrest in 1998 and had a defibrillator implanted; it didn't fire for nine years until this January and Rikon believes it happened because he took the double-dose Digitek.

"In January I started to feel sick," says Rikon. "I had unusual heart palpitations, along with cold sweats and fatigue and this went on until the morning of February 19th. I hadn't slept much the night before and felt even worse but being the jerk that I am, I went to the office. 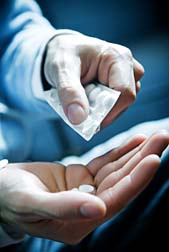 I live in Manhattan and one block away from the subway. I got one flight down the subway stairs and my defibrillator fired—BAM, like a full electric shock. I stood still for a moment then managed to get back to the street, grabbed a cab and went straight to Beth Israel ER.

The ER doctor thought I was in cardiac arrest so they placed a nitroglycerin plaster on my chest and hooked me up to a monitor. In addition to the regular ER doctor my cardiologist came by and the hospital's electro-physiologist showed me the heart graph: I went into Atrial fibrillation (A-Fib) which means the top chamber of my heart was beating so fast that the bottom chamber couldn't catch up. Apparently the defibrillator saved my life.

The cardiologist said this looked like a new development; he couldn't attribute it to my current condition. I told the doctors that I was taking Digitek but nobody said anything.

Eventually I was stabilized and released but I was still on Digitek and still not feeling well. I went to work two weeks later and my ex-secretary dropped by. 'Did you know that Digitek was recalled?' she said. (Her husband had the same condition.) I hadn't heard anything about a recall!

I immediately went online and sure enough there was a recall. Next, I called my pharmacy and asked if there was a recall. 'What does the pill look like?' the pharmacist asked. I described it and she said, "Yes, that sounds like it so bring in all the pills you have left.'
'How long have you known?' I asked her. They had known for a few weeks.
'That is really outrageous, I could have died from this stuff,' I replied, furiously.

The pharmacist prescribed an alternative med and I felt better right away, but I was still angry. In fact I wrote a letter to the VP of the Duane-Reade Pharmacy explaining that I wasn't informed of the recall and it was particularly outrageous given a drug so significant as Digitek. Here's the kicker: two weeks later I got a form letter from the pharmacy informing me of the recall…

What happened next was odd: about two weeks later I got a call from a claims adjustor; he was investigating my letter from Duane-Reade and asked if I could send him all the information I had and he will try to resolve the situation. I did so and never heard back.

More DIGITEK News
Even as an attorney, I wasn't thinking about a lawsuit at that time. Then I saw something on TV about Digitek cases and that's when I went online and filed a complaint with LawyersandSettlements. Usually with meds such as Digitek there are big warnings in the New York Times and the Wall Street Journal but I didn't see anything. There should have been recall notices splattered everywhere in the press and that is unconscionable.

I believe I have a case. After all, how can the pharmacy deny I was given the medication? I want to get involved in this class action against Digitek's manufacturer because they shouldn't get away with it. And it is such a dangerous pill; you know those nurses who killed all those patients? They overdosed the victims with digitalis.

I recently saw my cardiologist and told him that the cause of my A-Fib had nothing to do with my defibrillator--it was caused by the double dose Digitek pills. 'Yes that would cause it,' he said."