Mike's Dad turned 87 this month and was in pretty good shape until last November; Mike says his health deteriorated rapidly and he can't help but wonder if Digitek is to blame.

Mike says his Dad, a WWII veteran, had no major diseases except for a respiratory problem and just a few aches and pains that's just part and parcel of old age. But last November he saw numerous physicians and the first of many hospitalizations began. 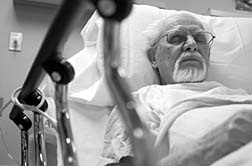 He is a retired registered engineer with a long history in the Houston business community. WW11 veteran. We first started noticing a decline in his health about a year ago. He was ambulatory up until November 2007 and his health rapidly declined at that point. In November and December he saw many physicians and his first of several hospitalizations began—the same time that he started taking Digitek for an abnormal heart rate.

"In January 2008 Dad was referred to the Forum Place Medical Center in Houston—a retirement community and rehab hospital," says Mike. "He spent about one month there and was discharged home where he still required care 24/7 so we hired professional caregivers to stay with him during the week and we rotated the rest of the time.

More DIGITEK News
One weekend my brother noticed Dad was weaker than usual; he was really dizzy and couldn't even walk to the bathroom so they took his blood pressure: it was 50 over 30. That was extremely low and dangerous especially with Dad's pacemaker. Then he started to get nausea and vision problems. My brother called to talk to my wife, a registered nurse, and they decided he should go to ER--my wife was very concerned about his blood pressure.. By the time he got to the hospital, Dad completely lost his vision and became totally disoriented. This was extremely abnormal because he'd been fine up until this point, it just happened so fast.

Dad stayed about one week in hospital this time around and never got a diagnosis except 'maybe' he had a bladder infection. I took him home and as far as I know, he was still taking Digitek. We weren't aware of any recall at this time.

About one month ago I was surfing the Internet and read about the Digitek recall: I studied the symptoms and immediately thought of Dad's last hospital visit. His symptoms mimicked exactly the symptoms in these articles. I examined his meds, took a Digitek pill, sealed it in an envelope and put it away. Then I went to the FDA website and saw the manufacturer's recall. "