Nancy's mother didn't get any Digitek recall notification from her pharmacist and Nancy believes that Digitek toxicity was to blame for her mother's death.

"I don't know how long my mother was on Digitek but I have receipts since January," says Nancy, a registered nurse. "The pharmacy won't tell us how long my mum was taking the drug; I think they don't want us to know because of potential lawsuits... 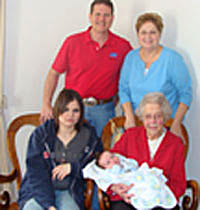 My mum did have some heart problems and minor strokes but she was in good health and over 100 people celebrated her 90th birthday party in April. She was walking, laughing and greeting everyone and had a great time, all day and into the night.

After her birthday I stayed with her at my sister's house for a week. She would stay up every evening playing cards, sometimes for several hours after dinner. I went back home that weekend and on May 5th my sister took mum to her routine cardiology appointment.

Her regular cardiologist wasn't there so she saw an intern. Mum is instructed to take all her meds to these appointments. The nurse wondered why she was still on Digitek and told her it had been recalled.

'Our office called every pharmacy in the area, and they were telling their customers about the recall,' said the nurse. She likely took the double-dose pills after the recall.

The nurse called the pharmacy and asked why my mum wasn't notified of the recall. The pharmacist got mad and said he resented getting that letter from the doctor's office. 'It took me all day to find patients on Digitek and I faxed the list to your office,' he said, 'and thought you would call.'

'No, you were supposed to call', said the nurse.
(The pharmacist was supposed to notify his customers because doctors write the prescription for Digoxin and the pharmacist fills it with Digitek that is about .25 cents cheaper --both are digitalis)

The doctor told mum that she had to stop Digitek immediately and wrote her a prescription for Lanoxin. But he should have asked if she had any symptoms from Digitek toxicity. And would there be any withdrawal? Your heart is shocked from taking double strength to a single dose or a different med. Plus she had a day without any medication at all.

That was Monday. By Saturday my mum could hardly walk; she was nauseated and weak. Her extremities were blue, from hand to elbow; her lips and face were blue. My sister Juanita said, 'You've got to go to the hospital.' But my mum said, 'This has been going on all week, just let me sit here and die.'

Juanita called 911 and they rushed her to ER. They got her a room and she saw her regular cardiologist. He treated her for congestive heart failure, but she had all the symptoms of Digitek toxicity. 'Your mum can stay here and die or go home and die,' the doctor said.

More DIGITEK News
We took her home. By the end of May her nausea was so bad she couldn't out of bed. I called the cardiologist's office and asked them to prescribe something for nausea and pain. I am a nurse; I can take care of her. My sister went to church and broke down crying—a woman from the congregation said we could get someone from hospice to see mum. On June 1st she was sitting up and talking. That night we bathed Mum and put her to bed. She had a heart attack. I was able to give her morphine and held her for two hours. She had a stroke a few days later and was unresponsive. She died in our arms on June 6th.

Mum didn't have to die. She went downhill way too fast; there was no reason for this. I know it was because of Digitek toxicity. Our entire family believes that Mum was killed. And now we've found out that it has happened to others. Where was the quality control? I don't understand how this could have happened. This drug company killed my mother."