William was doing fine until he took double-dose Digitek "the size of horse pills," says James, his son-in-law. "Although William was 90, he was in great health: he drove, still electrically wired people's homes and his mind was sharp as a tack." Fortunately, William was sharp enough to notice his Digitek tablets had doubled in size.

"We were sitting down for dinner and William told us about the 'horsepills' and that they had changed, maybe re-packaged somehow," says James. "He'd been on Digitek for about a year and had no idea why they had changed. My wife was the first to tell him not to take anymore. A few weeks previously, he had started to feel bad and complained of no energy but he couldn't sleep at night. He also had shortness of breath and thought he had angina. William went back to his doctor and told him about not taking anymore Digitek so as far as I know, he was prescribed an alternative. 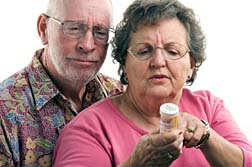 About a week after that, he really went downhill. His blood pressure went so low—it was about 100/50 and we got him to the hospital. They put him on oxygen and meds to get his blood pressure back up to about 118. He was in the hospital all last week and we just got him home yesterday. They ran a heart catheterization and just about everything else. He didn't have a blockage but his upper heart ventricle was not in synch with the lower one—this was probably why William said his heart felt like it was 'fluttering'.

William now has home care but he is very independent-- if you know what I mean. We are trying not to make him unhappy.

Right after he stopped taking Digitek we saw the recall on TV and the internet. Amazingly, neither his doctor nor pharmacist called to tell him about the recall. You pay hundreds of dollars for these pills and if they don't work, you don't get a refund. This is the first time we have ever called a lawyer.

My father-in-law probably has a few good years left. William is having dinner right now—he really enjoys food. I give him a bottle of beer when he comes over and that's about it—he enjoys it and he can still have a good life.

More DIGITEK News
What really bothers me is why did the size of the pill change so much? Up to half-an-inch more, there has to be something wrong. All I can say is that it's a good thing he noticed. William is stubborn but we respect each other: thank god he listened to my wife and stopped taking Digitek when he did. Now all we can do is hope."

And get involved in a lawsuit. On July 8, 2008 a national class action drug product liability lawsuit was filed against the manufacturer of Digitek in Federal Court in Michigan. The suit alleges that there was a manufacturing error in Digitek, the brand name for digitalis. The 125 mg labeled tablet was actually .250 mg; and, the tablet sold as .25 mg was actually .50 mg. This manufacturing error is not covered by the grant of immunity—intended when Michigan's drug manufacturer immunity legislation was adopted during the Engler Administration. As well, the filing of this class action lawsuit in Michigan prevents the statute of limitations for other Michigan citizens from expiring.

Posted by
reginald w blackshire
on March 21, 2013
I wonder is this why i had 7 ablations and cardioverted over 10 time and still have problems wish i had saw into this lawsuit..smh been having heart issues since 2000