Paul's wife had a heart attack in '95 but made a remarkable recovery and started taking Digitek. But she experienced other problems: coincidentally, she suffered the same complications listed on Digitek's website, namely nausea, fatigue and irregular heartbeats. And death.

"My wife passed away on February 24th; we were high-school sweethearts," says Paul. "We would have been married 52 years this June 3rd—but Rachel died on our daughter's birthday--she would have been 70 years old. 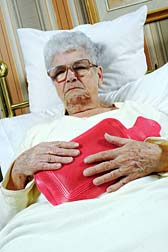 Paul says that Rachel always felt bad. "She didn't hurt but said she just felt bad all the time," he says. "She took 0.12 mg of Digitek once a day—I know that for a fact. Rachel constantly felt nauseous, sick to her stomach. She had no energy and didn't feel like doing anything.

I got a letter from Wal-Mart this month about a Digitek recall and as a result it made me question what was going on. I am computer savvy so I went on the internet—my immediate reaction was 'Whoa, what the heck is going on?' At first, I had a hard time finding anything from Actavis, the manufacturer, but once I read the side effects, they pointed directly to my wife.

It is too coincidental—she had all these symptoms after her heart attack which meant they developed while she took Digitek. There was nothing like this in her family history—these problems just came out of the blue and didn't relate whatsoever to her previous heart issues.

Rachel went into hospital on February 10th. They wanted to release her three days later but she said, 'No, I'm not ready to go home,' although the doctor had already signed the release papers. She just sat in the hospital room and cried. They kept her until the 14th. On the 17th I called 911 and she went back to the hospital. She coded on the 22nd in her room and they took her to ICU, in fact I was there when she coded. She tried to hold on until our daughter got here, but she wasn't able to say goodbye.

We were together 56 years; I really lost something. We never once argued; we loved each other. We had Ruth cremated and now she is sitting here in this box, on the windowsill.

I am so upset; I don't know what to do with those drug makers. Then I read that so many possible lawsuits were pending against this company so I recently went to the hospital and asked for her records. I have to fill out papers such as the privacy act and have to certify that I am the survivor. I plan on taking these documents to the hospital tomorrow to request her official records.

As for Actavis, I'm a nice fella but if you get your hackles up at me, I can get them higher."

Another alarming fact is that, as well as listing all of Digitek's side effects--from mild to serious one medical website states the following: "Side effects other than those listed here may also occur. Talk to your doctor about any side effect that seems unusual or that is especially bothersome."

As well Digitek may require "dosage adjustment" if a patient is taking other medicines, including prescription drugs or over-the-counter medicines and herbal products.

One website advises patients to tell their doctor if they are taking any of the following medicines before taking Digitek:This extensive list begs the question: does every patient on Digitek have this check-list? Does their doctor? And are patients aware of the many side effects, that don't even take into account overdosing on Digitek?

Posted by
Marilyn bloch
on December 16, 2015
My doctor gave me atenolol as well. My pulse is now slow.