The recent recall affecting all lots of Digitek digoxin (digitalis) due to a manufacturing defect raises a whack of questions as to just how a double-thickness tablet can get by the quality-control department. Pills that are twice as thick as normal, and therefore potentially carrying twice the dosage of digoxin, pose a serious health risk for patients that could lead to death. 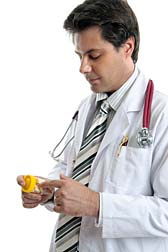 Actavis Totowa LLC initiated a Class 1 nationwide recall of Digitek (digoxin tablets, USP, all strengths) for oral use on April 25th. The products, manufactured by Actavis, are distributed by Mylan Pharmaceuticals, Inc. under the "Bertek" label and by UDL Laboratories, Inc. under the "UDL" label. Reference was made to a manufacturing problem. Information was updated May 9th with an FAQ released by the company, but there was little new information beyond a listing of symptoms and side effects related to the consumption of double-strength digoxin tablets.

However, one has to wonder just how such a manufacturing faux pas can occur, and how far back the problem extended before it was ultimately discovered, or at the very least addressed. The fact that dual-thickness tablets containing double the strength of digoxin exist, appear to suggest that somewhere in the manufacturing process two single tablets were combined into one—hence the increase in size. How this got by quality control is the mystery.

However, concern with regard to quality control at the Actavis manufacturing facility in Little Falls, New Jersey appears to have been present in the summer of 2006, according to an article published March 1 of last year in Validation Times.

In the piece, writer Joseph Pickett references an inspection conducted under the auspices of the US Food and Drug Administration (FDA) of the Actavis Totowa facility at Little Falls between July 10th and August 10th of 2006. Following the inspection, the manufacturer was cited for a number of what are described as 'significant' deviations from Good Manufacturing Practices (GMP) related to the products made there.

As well, according to the contents of a warning letter reportedly sent to the manufacturer by the FDA on February 1st of last year, OOS test results in raw data were not properly documented, and that products were released based on re-testing without any regard or justification for discarding the initial OOS results.

The inspectors went on to report that numerous deviations were observed in the manufacturing process, together with in-process specifications—and yet there was no indication of prompt action on the part of the manufacturer to respond to those instances, or concerns.

A letter from the manufacturer received by the FDA dated August 29th 2006 addressed the concerns and promised corrective action. While the FDA noted that Actavis appeared to be sensitive to those concerns and had promised prompt action, the FDA felt it was incumbent upon the agency to stress the importance, and the need for a quick response, together with the recommendation that a third party conversant in GMP issues be brought in to ensure the plant was compliant, and up to snuff.

Was this done? The recall and the events of the past few weeks might suggest otherwise.

More News
Meantime, a pharmacist speaking to a reporter from KDSK TV in St. Louis suggested that the risk is a gradual build-up of medication in the system through consuming tablets that are twice the strength as required, and that build-up results in toxicity.

Symptoms of digoxin, or digitalis overload? The first thing a patient would notice, the first sign above all else, is the appearance of a yellow aura around everything that a patient looks at.

Digitek is a generic form of Lenoxin, and is a medication targeting the heart, to strengthen the heart. It's usually a long-term therapy.

While Actavis might chalk this up to a manufacturing problem, the risk to the patient is very real. Digitalis / digoxin accumulates, and that accumulation can lead to death. The margin of error is quite narrow. A patient taking oversized tablets for a week could wind up in serious distress, or worse...