Albert had been taking Digoxin for some time but in June his pharmacist changed the prescription to Digitek. "After about a month on Digitek, I had a hard time breathing, got bad headaches, was nauseated and also had blurred vision," says Albert. His symptoms are the classic signs of digitalis toxicity--Albert became ill around the time of the Digitek recall. 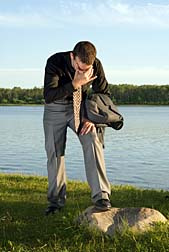 And the timing couldn't have been worse. Albert's wife was scheduled to have major surgery and the day she was in the hospital, Albert could barely breathe. He managed to call his cardiologist who told him to go to emergency—right away.

Which Albert did, and no doubt saved his life. "My heart beat had gone up to about 145-150 beats per minute," says Albert. "The cardiologist at ER said if it had continued at that rate for another few hours, I could have had a major heart attack." Albert was admitted and stayed in hospital for five days—one floor down from his wife.

"I tried to keep my wife from knowing what had happened to me but when I didn't show up at visiting time, our kids had to tell her," he says. "I called her on my cell phone. She knew about the Digitek recall but had no idea it would affect me so severely.

"I talked to the hospital cardiologist about Digitek and asked what could be done about bringing down my heart rate. They put me on two new medications to control the rhythm of my heart. And they decided to give me shock treatment, which is also known as invasive cardiology.

They put me on a table and put two paddles on my chest and shocked me twice to get my heart beat back down to the mid-80s. But, the doctor said the affects of the double dose Digitek and subsequent shock treatment has likely weakened my heart.

The doctor explained that taking too much Digitek put me into a high degree of A-fib [known as Atrial Fibrillation: an irregular heart rhythm that affects the upper chambers of the heart and can lead to rapid heart rhythm]. As for my prognosis, my pulse is stable right now and the doctors said that we can just hope it won't happen again.

I talked to my family doctor about the Digitek recall before I went to the hospital. He didn't know anything about the recall; apparently the drug maker [Actavis] only told cardiologists and pharmacists.

When my cardiologist took me off Digitek he wrote a prescription for Lanoxin. I took it to my pharmacist and told him that I wasn't taking Digitek anymore; instead I wanted this replacement.

'I only have six pills of Lanoxin left and I promised them to another patient,' he said.

More DIGITEK News
Luckily, I had a friend who knew a pharmacist at one of the WalGreen stores. She said if I came over right now, I could get 27 Lanoxin pills—that was all she had left. In other words, there was a run and consequently a shortage of Lanoxin after the Digitek recall. This was a dangerous situation; not just for me but even worse for a patient who couldn't get an alternative, replacement drug.

That was a nasty situation and taking the double dose of Digitek threw me completely out of whack.

I kept three of these double dose pills left from a bottle of 30. So I took 27 double doses that I know of.

The manufacturer sent me a letter via my pharmacist requesting that I please return any leftover medication and they would refund the cost of the prescription. How generous! They should refund my medical bills at the very least.

Right now I am getting my hospital bills together to forward to my lawyer. As well, I couldn't be home for my wife when she came home from hospital so I had to pay for home care. The drug company should be paying that as well, and then some."