Digitek: "I wasn't planning on Falling Apart so Soon"

Vickie's doctor put her on Digitek about two years ago for congestive heart failure but a few months back her feet started to swell and then the hallucinations started. "One night I thought my landlord came over to check on me but I talked to him the next day and he wasn't even there—the hallucinations were getting me scared," says Vickie.

"My landlord Earl is also a dear friend and checked on me when I was sick," says Vickie. "I also thought nurses were in my room because they sat at my bedside when I was in the hospital—I'd had a heart attack and that's when I was prescribed Digitek. 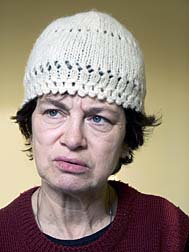 And I wasn't sleeping much. I told Earl that I can't make the nurses go away until I reach for them. 'I think I am getting dementia or something,' I told him. I thought I was under a lot of stress because of my heart and lung condition. And I had dizzy spells; I fell twice in my bathroom. I'd have to hold on to the sink and I would still miss the mark. My vision was getting all blurry so that wasn't helping either. The doctor thought I might have vertigo but that wasn't the case. It turned out to be Digitek.

I got a notice from the pharmacist that Digitek was recalled and it also listed the symptoms. Surprise, surprise. I got on my little computer my son gave me for Christmas. (I use it to shop and did he ever have a time teaching me!) I read more about Digitek and wow! All that happened to me. I was stunned that the medicine wasn't tested more before it was released to the public.

All that time I thought I was going nuts and it was all because of the Digitek. When I had that mild heart attack and the paramedics took me to the hospital they did some tests—I didn't have any blockage. Then I found out that Digitek also causes heart attacks. But it didn't dawn on me until the recall: that is bad. How long did they test this heart drug before giving it to us humans? They need a better study group, mind you, I would never volunteer!

More DIGITEK News
When they took me off Digitek and gave me an alternative drug, I was OK. The note from the pharmacist also asked to bring the pills back to the pharmacy or send back to the drug company but I thought something was fishy so I kept them.

I recently moved from my house to a rest home and have to see another doctor. It's difficult to get out and about: I wasn't planning on falling apart for another 10 years or so and what's not broken is sagging. This body is going fast. Besides, I'm in no great hurry because I don't even trust doctors anymore.

I saw a Digitek ad on TV and then I went online. I filled out a legal form and it looks like I might get involved in a lawsuit, but whatever happens, happens.

The worst part of suffering from Digitek toxicity was that I thought I was losing my mind, I didn't know what was causing me to be crazy. It is a 'dirty dog shame' they would do this to any human being. Good thing I held onto my brain 'cause everything else went south."