Frances took Digitek for several years to help control her heart condition—congestive heart failure. She was feeling OK until a few months ago. "My heart started to flutter and race and it really scared me," says Frances, "and I felt sick all the time." It wasn't until weeks later that her pharmacist called and told Frances about the Digitek recall.

"My doctor didn't say anything about it and the pharmacist replaced Digitex with Lanoxin," says Frances, "and I didn't think too much more about it." 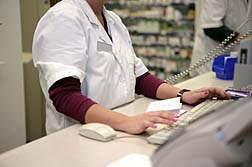 But Digitek can be life-threatening at high doses: the defective recalled tablets were made at twice the thickness and the tablets allegedly contained double the dose of the active ingredient—a potentially lethal amount.

Frances complained to her doctor about her symptoms but he couldn't determine the cause. "It got to the point that I was throwing up all the time and had no energy," she says. "My abdomen ached too and sometimes I could hardly walk--I had to take time off work.

Now I am having a problem with my right shoulder and ache all over. Recently I had a catheterization to see how much my heart is damaged and had to get my vision checked. My eyes got worse in the past year and the doctor said my heart muscle is damaged—that's the reason I am on Digitek. But sometimes when my heart flutters and races it scares me—at times I think my heart is in my chest. At first I thought it was gas and I had to move my shoulders. I couldn't take a deep breath. Sometimes if I take a deep breath I get the shortest breath—this sounds strange but a deep breath takes my breath away. I try not to get nervous or panic when this happens, but try to deal with it.

More DIGITEK News
Once the pain goes away, I can deal with it. During the time of the recall I was feeling really dizzy and lightheaded. When I stopped taking Digitek I felt a little better. I don't know if this drug has caused any more damage—maybe I should get another heart catheterization and find out."

On June 30, 2008 the US Drug Watchdog expanded its national investigation into Digitek. "The Digitek defect could expose users to twice the amount of active ingredient, which could cause serious and even fatal reactions," said the Food & Drug Administration.

On April 25, 2008 Actavis Towtowa, the makers of Digitek, recalled the tablets due to a possibility that double the dose—double the appropriate thickness—may have been commercially released. The FDA classified the recall as Class 1, meaning that the defective Digitek tablets could cause serious health problems and even death. By now, most everyone who was taking Digitek has received notification of the recall by their pharmacist or physician. Let's hope so...