"Digitek Almost Did Him In"

Although Brenda's Dad just turned 91, he was "extremely vital" until he took almost a whole bottle of double-dose Digitek. In fact, he was set to be the oldest licensed electrician in the state of Arkansas. "Ninety is the new 70 where my dad is concerned, but Digitek has really done a number on him," says Brenda. 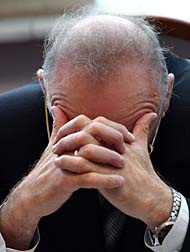 "I still don't know if we are going to sue Actavis [the manufacturer], but it sure made me mad," she says. "Until my dad—Bill--took the double dose pills, almost 30 of them, he was doing electrical work in his neighborhood and started to retake his electrician's test. And he had a lively brain, to say the least—he was a former professor, in charge of the University of Arkansas' technical division.

But Dad started to get confused while studying and couldn't concentrate. His vision became blurry and when he lied down at night, he felt pressure building on his chest. He ended up sleeping in a chair for a month. And he had very dark circles under his eyes. We found out later that he suffered another heart attack without even knowing it, right after taking this last bottle of Digitek. The doctor said it probably happened in his sleep—I've since learned that you can have a heart attack and not even know it…

Dad had open heart surgery 14 years ago and he had been taking Digitek for several years, with no adverse reactions. He has lived a very healthy lifestyle since then with no problems—until the end of April. When he started taking the last 30 days of his prescription, he noticed the pills were a bit larger; he took almost all of them before his doctor's office phoned and told him about the recall.

After the office called and told my Dad to stop taking Digitek, he went back to the pharmacy on his own steam and turned in the remaining few pills. I wish he still kept them.

After that, my dad went downhill quickly. He lives close by so I see him every few days. I told my kids their grandad doesn't look well. My daughter works with the elderly and she said he was just getting old. But he had a different look in his eye. Dad didn't tell me until after the fact that he took this double dose so it came as a surprise to me. His biggest issue was not being able to sleep at night. Food was coming up in his chest and now I understand it is a side effect from digitalis toxicity.

I took him to his regular doctor and dad was immediately admitted to hospital. They ran a lot of tests on him and his doctor suspected there was a lot going on—dad was in a precarious situation. And another thing, he could barely walk--he was so weak; he couldn't eat but thought it was just acid reflux. So the less he ate, the weaker he got. My father's biggest delight in life is food—it has been emotionally devastating for him; we were all having a hard time dealing with it.

Dad was finally discharged from hospital about one month ago. He is back home but on oxygen, mainly at night. I had to get a hospital bed so we can keep him elevated. A care giver comes in a few days a week: she cooks and someone else cleans. So he has somebody there every day, including me. He is getting strength back, slowly. The older you get, the harder it is to bounce back. He was so excited about taking that electrician's test but I'm not ruling it out yet, even though my husband calls me the temple of Doom," Brenda says, laughing

More DIGITEK News
But Brenda is optimistic regarding Bill's health. Although he only has 30 percent use of his back heart muscle, Bill was able to celebrate his 91st birthday in style—dinner at Mount Magazine Lodge—the highest point in Arkansas. "He is very short-winded but not willing to get into a wheelchair yet," says Brenda.

"When I first heard about the recall I went online to get information about the symptoms of digitalis toxicity; sure enough, they corresponded with Dad's symptoms," she says. "Next, I filled out a questionnaire with LawyersandSettlments and that's when everything came together. The law firm phoned right away and we filled out some more forms. Dad said he didn't want to get involved if his doctor was going to get into trouble. But I told Daddy that once the doctor found out about the double dose Digitek, he took action and phoned, and told Dad to stop the medication.

To take twice the amount, especially at his age, could have been a lethal dose—actually, it almost was."