Evidence continues to mount that the DePuy Synthes Attune knee replacement device may be a defective product that can harm patients. There are many reasons for hip and knee implant failure, but a major culprit in the malfunction of Attune knees appears to be something rather technically referred to as “tibial baseplate failure,” or “debonding.” In everyday terms that means the artificial knee comes unglued from a patient’s lower leg. 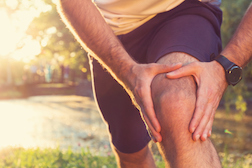 This is what patients feel when parts part with other parts:
• Instability in the knee when standing or putting weight on it;
• backwards or sideways motion of the knee;
• decreased range of motion;
• inflammation, swelling, heat; and
• constant throbbing pain.

This is what DePuy Attune knee replacement patients report.

The Journal of Knee Surgery has identified an unusually high rate of premature failure in DePuy Attune Synthes knee replacements. A review of the FDA’s Manufacturer and User Facility Device Experience (MAUDE) database revealed 21 reports of tibial loosening at the implant–cement interface in just the two months prior to the journal’s report.

When they removed the defective device, some surgeons have reported that they saw no evidence that cement or bone had ever adhered to the implant. Others described the removed metal tibial insert as clean from any bond—essentially looking the same as it did when it was removed from the sterile packaging and implanted.

It was clean; it never stuck; the cement failed. What caused the glue to fail is still not entirely clear, but patients were hurt.

DePuy Synthes is no stranger to controversy concerning its Attune knee replacements. In June 2015, the FDA recalled its Tibial Articulation Surface Instrument, a device used during knee replacement surgery to ensure correct placement of the tibia. A small coil that was part of the instrument could become detached and be left inside a patient. It’s the modern equivalent of a sponge left behind when the incision is closed.

More DEPUY SYNTHES ATTUNE KNEE REPLACEMENT News
DePuy Orthopaedics, a subsidiary of Johnson & Johnson and the parent company of DePuy Synthes, has also been embroiled in litigation involving hip implants. In December 2016, for example, a federal jury in Dallas returned a combined verdict of more than $1 billion on behalf of six people who suffered serious medical complications caused by defective metal-on-metal hip implants.

Nonetheless, Johnson & Johnson, DePuy Orthoopaedics and DePuy Synthes continue to be market-makers. No recalls of the DePuy Synthes Attune knee replacement device have been issued yet and no lawsuits have been filed to date. The situation seems increasingly ripe for both.

If you or a loved one have suffered losses in this case, please click the link below and your complaint will be sent to a drugs & medical lawyer who may evaluate your DePuy Synthes Attune Knee Replacement claim at no cost or obligation.
Request Legal Help Now