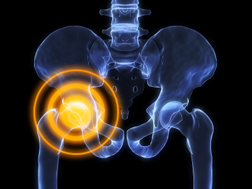 The new Pinnacle hip replacement is different from the previous version because the newer version will be a ceramic-on-metal design. The older DePuy Pinnacle is a metal-on-metal design, which has been linked to serious health problems. Although the DePuy Pinnacle remains on the market, a different metal-on-metal device from DePuy, the ASR hip replacement, was recalled in 2010. That recall was announced after reports of unusually high failure rates in the device.

More DEPUY PINNACLE News
Among concerns about metal-on-metal hip devices are that metallic debris can come loose from the device through normal wear and tear and be absorbed into the patient's bloodstream and surrounding tissue. That can result in high levels of metals, including cobalt and chromium, in the patient's system and can ultimately cause failure of the hip replacement device.

The new Pinnacle device will be called the Pinnacle CoMplete Acetabular Hip System. It is reportedly the first hip replacement system to use a ceramic ball and metal socket. The FDA approved the device after a two-year clinical trial that found no difference between patients who received the ceramic-on-metal device and those who received a metal-on-metal device.

Signs that a hip replacement device has failed include pain in the hip, limited mobility and difficulty moving. For some patients, the only sign that something is wrong is a blood test that shows high levels of cobalt or chromium. Patients who experience a hip replacement failure may require revision surgery to replace the failed device. With each revision surgery, the chances of complications increase.
READ ABOUT DEPUY PINNACLE LAWSUITS

Posted by
Tim Petri
on March 27, 2013
Metal is Metal. It does not take Columbo to crack this case. This bogus "new and improved" pinnacle approved in June of 2011 is a joke. So the FDA approved it "because it is no WORSE or no BETTER than Metal on Metal??? Ceramic on Metal is still Metal. Since I was one of the first ones to get the new ones in 2011, it took 10 dislocations before a revision was done, and chunks of metal were scraped off of the metal portion of the part. Ceramic is a harder substance than metal, so whoever the genius who came up with the design should be implanted with one in each hip to test his product. This whole thing is a big joke, and most lawyers are so hyper-focused on "metal on metal, it has not occurred to them that the token replacement for this is even worse. My ceramic on metal part which was removed has chunks of metal missing from the ceramic piece rubbing against it during dislocation. When will someone wake up and realize a zebra does not change its stripes? Depuy is a proven unethical, lying, apathetic, money hungry company who would rather see people die and unable to testify then actually address the design flaw?