Fred was told that he was a candidate for a hip replacement. He wasn’t told that some hip replacements, particularly the DePuy hip, have caused no end of problems. He later found that his DePuy hip implant was recalled. 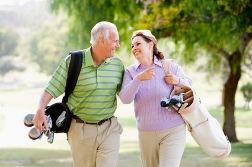 Back in 2007 Fred (not his real name) had a lot of hip pain and couldn’t walk any great distance. Being an avid golfer, this was extremely troublesome. X-rays determined he had osteoarthritis in both hips. Fred, age 69, had worn them out over several decades playing sports. He had more x-rays at an orthopedic clinic and was told that when the pain became intolerable, they could replace both hips.

“We set a date for surgery in early 2008, after the golf championship,” Fred laughs. “I got the left hip done and at that time I didn’t know the difference between metal-on-metal hip replacements or ceramic; DePuy or Stryker. But I trusted my orthopedic surgeon; he was one of the top three surgeons in Atlanta and I read good reviews online.”

Fred went to physical therapy and returned to work but he felt like there was something on the bottom of his foot, like he was constantly standing on a rock. “My surgeon told me that he added an extra 3mm to my hip device because it was so worn out, but it didn’t want to heal,” he says. “This really put a dent in my golf game. I couldn’t turn like I wanted to because I was stressing the joint and it wouldn’t heal.”

Even though the DePuy hip continued to cause problems, notably that the left leg seemed longer than the right, Fred went ahead with the right hip replacement in 2010. “My orthopedic surgeon told me they were the same length but then I heard about the DePuy ASR recall and DePuy hip lawsuits. Huh, I had those same symptoms, and I was worried about the metal causing blood poisoning. I had blood work done but nothing showed up. My surgeon told me that when the pain gets intolerable I could get the hip replacement replaced anytime. I’d heard that before.”

Fred decided to wait it out. But the pain got worse: he continued to have groin and hamstring problems and his hip flexor muscle was tightening up so badly it was causing his stride to get shorter and shorter.

“In December 2012 I had revision surgery,” he says. “This time my surgeon gave me a hip block so I would have better recovery time. Right away my leg felt a lot better, and even though I was sore from surgery, my walk was much better. I play bridge with a few ladies and they saw me soon after surgery in the walker??"they said I don’t wobble side to side when I walk. I didn’t realize it was so noticeable.

"I was given another DePuy hip but this time (my third hip surgery) it wasn’t metal-on-metal. I have a metal stem with a ceramic head. So both hips are now the same as far as the hardware goes.

More DEPUY HIP REPLACEMENT News
"I am looking forward to getting back my golf swing. I contacted an attorney and he is taking my case. I gave him permission to get all my medical records, which he has done. We talked about the DePuy recall; about how many cases are going forward and two settlements in Maryland and a case this month in California. Another case is going to court in March. I found out there isn’t a class action; instead it is a multi-district litigation, or MDL, with thousands of cases already filed. I checked out all the information on LawyersandSettlements and read the newsletter--very informative.

"Now, four years between the initial implant and the replacement, I am hopeful that I can recover some money for pain and suffering, above the medical expenses I incurred. I had to co-pay for many physical therapy visits and doctor visits for my left hip after it was supposedly healed. As well, I retired in 2010 so I missed five weeks of work. If I had a proper implant this wouldn’t have happened. But with this recalled hip taken out, I’m hopeful that I have lots of quality time ahead of me. And lots of golf."