A woman who received a DePuy hip replacement in August 2009 has filed suit against the company who made the device, reports KGMB and KHNL. 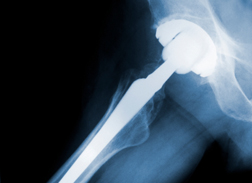 Jacqueline Lum's attorneys allege that the replacement failed shortly after its implantation, causing significant pain and necessitating the imminent replacement of a year-old device intended to last up to 15 years.

More DEPUY HIP REPLACEMENT News
"[The DePuy hip replacement makes it so that] it hurts to sleep at night. I need to take medications so it can help take the pain away," Lum told the news source.

Her attorneys also claim that irregularities in the device have resulted in the deposition of heavy metals like cobalt and chromium in Lum's bloodstream.

They further assert that DePuy Orthopedics was aware of its device's defects more than two years in advance of Lum's August 2009 surgery.

According to the news source, DePuy issued a worldwide recall of the faulty device in August 2010, stating that "...more people than expected who received the ASR hip system experienced pain and other symptoms that led to a second hip replacement surgery," although they went on to note that most recipients of the device reported no problems.