Patients who have filed a DePuy lawsuit following revision surgery to remove a metal-on-metal DePuy hip replacement are already aware of the pain caused by metallosis. But researchers in Canada may have found another side effect that could be attributed to metal-on-metal hip devices such as the DePuy ASR, at least according to a recently published study. 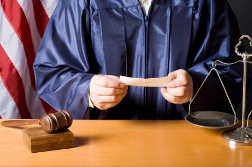 The study was published in December in the journal Orthopedics, and details the condition of a 54-year-old female patient who received a metal-on-metal hip replacement. According to researchers, the patient developed swelling in her leg five years after hip replacement surgery and this swelling grew worse when the patient walked. The leg swelling was "secondary to venous obstruction by a metallosis-induced iliopsoas bursal cyst associated with markedly elevataed intralesional cobalt and chromium levels."

In other words, after having a metal-on-metal hip replacement, the patient experienced metallic debris coming loose from the device and being absorbed by her bloodstream. This caused a bursal cyst on her iliopsoas, which compressed her femoral vein. The bursal cyst had increased levels of chromium and cobalt.

Researchers noted the patient underwent revision surgery to replace the metal-on-metal hip device with a ceramic-on-ceramic hip device and at one-year follow-up did not have any signs of recurrence of the cyst.

More DEPUY HIP REPLACEMENT News
"Metal-on-metal bearings of the hip are associated with elevated concentrations of metal ions in the hip joint and systemically," researchers noted. These elevated metal concentrations can cause adverse reactions, including build-up of fluids, and the development of lesions, cysts and pseudotumors.

Lawsuits have been filed against DePuy, alleging their metal-on-metal hip replacement devices were defectively designed, causing serious pain and harm to patients, and forcing them to undergo revision surgery to fix the problem. The DePuy ASR hip replacement devices, which were recalled in August 2010, were shown to have a higher than normal failure rate. Early reports suggested the DePuy device was failing at a rate of between 12 and 13 percent, but information given by the British Orthopaedic Association and the British Hip Society in March 2011, suggests the failure rate is more than 20 percent after four years and up to 49 percent after six years.

Posted by
Jeanette
on February 4, 2013
My husband is getting a hip replacement soon, he's going through pre-op tests, etc. currently with the VA medical system. My question is, what type of replacement material is safe? We know metal on metal is not good, but what other types are available that are safe? Any information would be appreciated!