Depakote: The Kids Are Not All Right

"My mom suffered from epileptic seizures since she was a kid, and I know she took Depakote during her last two pregnancies," says Taylor. "My youngest brother and I are most affected by birth defects because my dad said that by the time we were born, she was on a higher dosage of Depakote and she was taking Dilantin. Growing up, I remember seeing those white bottles with purple letters and purple Depakote tablets." 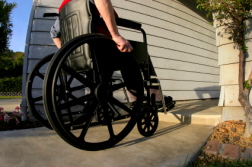 Taylor was just fitted for a wheelchair. She is unable to write more than a paragraph because her hands "lock" and she has already undergone a number of surgeries to try and correct the problem. She also has a number of back issues. "I didn't know how serious they were until I was in a car accident," says Taylor. "The doctors said every disc in my neck and some places in my spine are degenerative.


"I am so mad at the makers of Depakote. I am mad that I had to go through all these surgeries at such a young age; I am just trying to have a normal life and raise a family"
"I've had both my hands fused; a fusion in my neck; a weird growth the size of a grapefruit underneath my arm was removed; a tumor in my foot was removed; my kneecaps have been twisted since birth and now I am down to half a layer of cartilage in both knees… What is causing all this? Why so many surgeries?

"My brother recently fell down the steps and he needed rods and screws in his foot—he lifted weights and worked for UPS but his bones are brittle. My middle sister had three back surgeries, just like me. It is really weird because there are seven years between the three of us and we have similar characteristics, in the same, identical spots. That is really unusual in siblings."

Taylor's father confirms that his last two children are most affected by Depakote. "I was gone a lot with work but I remember how my youngest son used to sit around and bang his head on the floor," says Edward. "Both girls had all kinds of surgeries for their bone problems but I don't remember any doctors explaining why they had all these problems."

More DEPAKOTE BIRTH DEFECT News
Taylor adds: "My dad saw Depakote and its association with birth defects advertised on TV a few months ago. I told my doctors about Depakote but they don't want to talk about it. Then I went online and saw so many complaints about birth defects. One lady on LaywersandSettlements talked about her child having spinal problems and autism. My second oldest brother used to stare out the window and bang his head against the wall (my oldest brother was killed).

"My first son has Asperger's syndrome, which is a mild form of autism—isn't that a coincidence. I am so mad at the makers of Depakote. I am mad that I had to go through all these surgeries at such a young age; I am just trying to have a normal life and raise a family. I am trying to hold it together for my kids and just hope they don't have any adverse effects besides Asperger's.

"It makes you wonder why Depakote birth defects are becoming public now. How could these drug makers ever let someone like my mom take all these meds while pregnant and think that all of us kids would turn out normal? "

The FDA first approved Depakene (valproic acid) in 1978 for the treatment of epilepsy.