An emergency board meeting in a dental malpractice case in Tulsa, Oklahoma, has been set for March 4, 2011, NewsOn6.com reports. 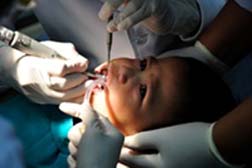 The hearing, which will determine the fate of Dr. William Letcher's license, has already been postponed three times during the past year and some of the dentist's patients are reportedly upset that they have waited such a long time for answers in the case.

At a meeting, a number of Letcher's former patients discussed spending thousands of dollars for dental work that either broke, caused them pain or even gave them infections, according to the news provider.

"There's resin he's put over my natural teeth that's cracking, chipping, breaking. When we go to take it off, we're not sure we can save those teeth," said Jennifer Attebury, one of Letcher's patients.

In 1995, the dental board put Letcher on probation and in 2000 his license was suspended for a year, according to the news source. The board said the hearing was postponed this time because Letcher was in rehab.

For many of the dentist's former patients, a revoked license would not be enough.

"I'd like to see him put in jail," Attebury told the news source.

If you or a loved one have suffered losses in this case, please click the link below and your complaint will be sent to a malpractice lawyer who may evaluate your Dental Malpractice claim at no cost or obligation.
Request Legal Help Now

Posted by
drmac
on February 11, 2012
People complain about the high cost of dental care. Well, here is exibit a as to why that is........ As a patient, you come to my office with a problem most likely caused by your own negligence and ask me to fix it. Well, with lawsuits like the above where patients are suing for cracking and chipping resin bonding, I am going to have make it worth my time and increased risk doinf a procedure like that. As a result, your cost goes up.
Posted by
.
on December 12, 2010
As materials go through stress cycles(fatigue}, they fail especially in the mouth which has temperature changes of over 100degres F especially in an acidic environment