Despite the fact that disability insurance is supposed to protect policyholders in the event they become disabled prior to retirement, some insurance companies still practice bad faith insurance by wrongly denying disability claims for chronic fatigue syndrome. Why was Christine denied benefits by Cigna, her Insurer, yet immediately recognized as disabled by Social Security? 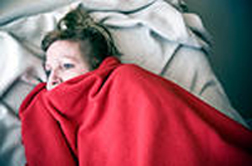 Although Christine’s final denial occurred in 2006, she hasn’t given up the appeals process. “I have been researching denied disability reversals and Cigna class-action settlements,” she explains. “In some states Cigna had to pay out settlements to policyholders suffering from chronic fatigue syndrome who were denied long-term disability benefits. And Cigna had to reopen some cases older than mine, so I am still hopeful that an insurance attorney can help me.”

Christine says that many people with this disorder or disease have a difficult time collecting benefits because insurance representatives don’t believe they are disabled. Instead, they are often considered “lazy” and “hypochondriacs,” and capable of work. The name itself (i.e., fatigue) doesn’t help: Currently some medical associations are trying to change the name of this disorder because it affects the brain and the central nervous system, which Christine knows all too well.

“I worked at the Henry Ford Health System as a medical technologist for 32 years, up until December 2004,” Christine says. “I had prepared a Christmas dinner for my family but it almost killed me, and I was unable to return to work after that. I was so ill that I could barely get out of bed in the morning; just trying to get dressed for work was torture. Judging from my symptoms, my doctor thought I had multiple sclerosis so he put me in hospital for a few days and I went through a battery of tests, but all of them came back negative.”

That year Christine was taken twice by ambulance to the emergency room with severe muscle spasms. One hospital doctor opined on her medical record that she “probably has chronic fatigue syndrome,” but he neglected to tell Christine. “Instead, like so many other health professionals, he probably saw me as an obese and depressed female,” she says. “A neurologist even tried to tell me that I had a severe mental disorder - hypochondria. I just got the runaround from physicians.”

In 2006, an internist diagnosed Christine with chronic fatigue syndrome. He wrote to Cigna that this diagnosis explains her inability to work and also explains her symptoms. Christine interpreted this diagnosis as positive: she knew that Social Security - the federal government - recognized the disorder as 100 percent disabling. Cigna still denied her disability claim by saying that her medical record doesn’t show an inability to work and that it wasn’t a serious enough illness to prevent her from working. But Christine had tried her hardest to work.

“I tried working at a clinic for the Detroit hospital where I had been employed for 32 years but they let me go after 90 days because I couldn’t keep up the pace and I wasn’t able to multi-task,” Christine says. “I tried to learn surgical technology but I wasn’t able to do that either; it entailed too much standing. I enrolled in grad school and almost completed my masters but I was just too tired.”

Interestingly, Christine says that when you apply to Cigna for long-term benefits, the insurer makes you apply for Social Security benefits at the same time - it is a pre-requisite. If you end up retiring with a disability from your place of work, they subtract your Social Security and pay you the difference. Social Security approved Christine upon her first application but she had a six-month waiting period. “The Social Security’s doctor examined me and I was surprised; I didn’t get any runaround,” she says. “But I had only received five months of short-term benefits from Cigna when they cut me off so I still needed to work. I asked the hospital to employ me part-time but they wouldn’t take me back. They knew I was having a hard time functioning and thought I would be a detriment to the lab, so I was forced to retire and that was very traumatic: I was only 55 years old and a single parent struggling to put my daughter through college. I wasn’t ready for that.”

More DENIED DISABILITY INSURANCE News
Christine had no income for almost a year and her benefits were not retroactive. She was entitled to long-term disability benefits for the rest of her life. Instead, she ended up losing her job and losing her house. And she had used up her appeals to Cigna.

“My wrongfully denied claim is criminal,” Christine says. “I paid premiums for all those years only to be denied and treated with such disrespect. The people at Cigna are so uncaring, they just beat you down. This disease is bad enough so making you financially crippled just makes me cry.”

Christine gets $1,800 per month in Social Security benefits. Since 2005, she should have been getting 70 percent of her salary from Cigna. “I wasn’t able to find an attorney willing to take my case and help me with the appeals process back in 2006, but there is a substantial amount of money at stake now, so I am optimistic that an experienced disability insurance lawyer will be interested.”
READ ABOUT DENIED DISABILITY INSURANCE LAWSUITS

Posted by
Flea
on May 19, 2014
I am now in the process of pre-litigation with Cigna, fighting for my long term disability benefits.. They denied me, I went through the appeals process and was denied. I had no more appeals left, so I hired an attorney who is suing them. The law firm immediately took my case. Cigna never examined me and never saw me in person. They lied and said my doctors were noncompliant with their requests for my medical records, i investigated and learned that they had never even requested my medical with ANY of my doctors. So i requested them myself and sent them to them. They became angry when i did so. They repeatedly sent me forms to complete. With each one, I mailed and faxed them. They even had the nerve to say they did not receive them as well. I was literally harassed by them wirh a massive amount of forms ro complete over and over. they knew it would stress me out. My doctor also didn't know what to do... Kept completing paperwork and Cigna kept making her repeat the process over and over. She finally told me she had to start charging me for the added work Cigna was placing on her. I don't blame her. I was told by a Cigna representative that since I'm able to hold a phone and feed myself then I can work. 'I've never met a more sneaky and unreliable, DISHONEST company than what Cigna is. In the beginning, I really liked my caseworker at Cigna. I truly thought she was being honest with me and helpful. All along she was lying to me. During all of this, the Internet has revealed thousands, maybe millions, of people who are also fighting dor their eifhts against this dishonest company. How would a Cigna employee react if it were them being treated like this. Better yet, what if it were one of their elderly parents being treated like they have treated all of us.
Posted by
Gary L
on November 23, 2013
I am currently on social security disability for my Chronic Migraine Headaches and Fibromyalgia. and up until last month I was also getting Long Term Disability insurance. I have been
Disabled for over two years. I had to leave my job of 14 years
As a GIS/IT tech because of my medical problems.
At the 2 year mark my LTD INSURANCE payments through Sedgewick LTD. we're halted because Sedgewick said their definition of disability changed!? To me, this is just typical insurance company bs and a way for them to discontinue paying benefits to people they know are 100% disabled.
Basically they get all your doctors office visit notes and pick through any little thing that can use to say you are miraculously cured and are no longer eligible to collect benefits regardless if your doctors make statements that confirm you are disabled.
Example, I get Botox neck injections for my migraines. In my doctors office notes he noted that I said these injections seem to help me especially with the neck centered migraines I have.
The Sedgwick person in charge of my claim ( who is not a medical professional by the way ) Said that to her, that means my migraines are (UNDER CONTROL AND MANAGEABLE) and thus I AM CURED And no longer disabled or eligible for benefits! She also mentioned that I only get the injections occasionally so I must be recovered. When I pointed out to her that "ocassionnally" is every 3 months, and that is because you can ONLY get the injections every three months,
It didn't change her opinion.
This is the kind of BS insurance companies do. They don't want to pay or do what's right so they CHANGE THE DEFINITION OF WHAT DISABILITY IS and then have non-medical or their high paid medical "specialists???" come to the conclusion they want.
I paid for this insurance, The bi-weekly premiums came out of my pay checks for years and now On top of my disability and medical problems I have to prove the impossible to them because they already determined the outcome. They just make your life hell! I know I can't afford to get by on just the
Small amount the Social Security pays. I should be getting at least 75% of my previous salary!
WHAT I NEED IS A VERY GOOD DISABILITY CLAIMS ATTORNEY IN THE PHOENIX, AZ AREA TO HELP ME FIGHT FOR WHAT SHOULD BE MINE NATURALLY! IF ANYONE KNOWS OF ANY PLEASE FEEL FREE TO EMAIL ME ASAP! Good Luck people, It's us against them!


Posted by
Colleen Ouimet
on November 18, 2013
Cigna denied my husband also, who has had 2 discs in his neck replaced and has another surgery coming up. Email me privately if you want to know which attorney sat on his case almost too long so that we almost lost his case, and one that is actually fighting for his rights. It is criminal that you pay premiums and even if doctors support your disability CIGNA claims the doctors are wrong. I wish there was a class action lawsuit by everyone they ever denied.
Posted by
Nancy Blake
on November 16, 2013
I am doing Ph.D. research on the different models of ME/CFS and how the psychiatric model seems to gain dominance.
I have read that insurance companies pay consultancy fees to psychiatrists, or doctors who have the view that ME/CFS is a mental problem, also that government agencies have an interest in being able to deny disability payments if an illness is defined as a psychiatric, rather than a physical disorder.
The recent insistence on the CDC employing IOM to come up with a definition of CFS seems to me to be part of this whole movement. I will be extremely interested in any information on all this - personal stories, insider information.