Denied Disability: Be Aware of the 90-Day Cutoff

Because Ann was so sick (she could barely get out of bed in the morning), she wasn’t aware of a 90-day limit to apply for long-term insurance benefits, which made it easy for the insurance company: They didn’t have to employ their roster of bad faith tactics to deny disability. 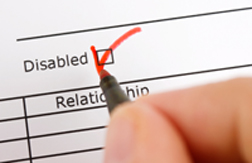 “Before I got sick, I was getting brain fog - I would try to remember a word but couldn’t remember it,” says Ann, who worked in public schools for 16 years. “Then I got bronchitis, went out on family medical leave and ended up in bed sleeping for about nine months.” Doctors couldn’t determine Ann’s illness, until she saw an immunologist.

Ann was diagnosed with a common-variable immune disease, something like the Bubble Boy’s disease. When she gets a common ailment such as bronchitis, she can’t shake it because antibodies aren’t produced to fight off illness. The immunologist explained that Ann has a rare and genetic disease that generally takes more than 12 years to get diagnosed. Ann was only 45 years old and her teenage son thought she was dying. Needless to say, she was unable to return to work.

In the first year of her illness, doctors tried to “jump-start” her immune system by treatments such as intravenous plasma. She had chronic fatigue, Epstein-Barr virus, and a host of other exhausting illnesses. One year later, it was clear that Ann was getting worse, so she tried to apply for disability benefits.

“I wasn’t thinking about disability benefits during that year,” says Ann. “After I left work, no one ever spoke to me about it.” She had paid into the Public Employees Retirement Association (PERA), which is the public pension fund for most state and school employees in Colorado, so Ann contacted them. They informed Ann that she was too late to apply for long-term disability benefits: she was supposed to apply within 90 days of her last day of work. But no one told Ann, not even her immediate boss.

“My husband asked me to pull out my 401k, we were running out of money. I didn’t know where to turn, and even if there was a turn, so I called Unum, the PERA insurer. The Unum rep sent me an application and explained that I would have to go through the appeals process. Of course my LTD claim was denied, and the appeals process went on for the next few years.”

Unfortunately, Ann couldn’t find a lawyer that she could afford. Her medical treatments were exorbitant - about $15,000 per month. Even though her doctor wrote off a huge bill and even though Ann joined a clinical study and didn’t have to pay full price for treatments, she and her husband lost their house and went bankrupt.

More DENIED DISABILITY INSURANCE News
“I am angry because I qualify for disability, hands down. After all these years working for the public school system, I assumed that I would be taken care of if anything would happen to me. I don’t qualify for social security benefits because I never paid into it. I have gone through all the internal appeals with PERA, and Unum says I haven’t proven why I didn’t apply within 90 days. Not being able to think about applying at the time because I was so sick isn’t good enough reason.”

Ann says she needs an attorney to show to PERA why she didn’t apply in time - she needs an insurance attorney to help appeal her Wrongly Denied Disability Claim and sue PERA. Meanwhile, she applied for Social Security’s Supplemental Security Income (SSI) to try and get a little monthly income. She qualified and the judge determined she was disabled. He backdated a claim to the date she quit work but still she couldn’t collect any SSI because her husband is employed. She did, however, qualify for Medicare. But that won’t get their house back.

Posted by
George
on August 25, 2013
That is very bad, damn insurance companies have lots of loopholes they use to prevent payments.

I don't know how they can live with themselves.