You almost have to be on your deathbed to collect short-term disability benefits from some insurance companies, as Robbie and her fiancé Ben discovered. 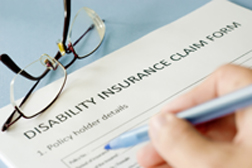 Ben says he can’t count the number of times he had to drive Robbie to emergency to get some pain relief. “Robbie had scar tissue on her uterus that caused severe pain and bleeding to the point where she couldn’t move,” says Ben. “I would have to carry her into hospital to get an injection of pain meds and she would be alright for a day or so, until the drug wore off.”

Ben says that Robbie, in her mid-30s, suffers from extreme PMS. Her periods were hell - heaving bleeding for several days. Her doctor advised a hysterectomy and Robbie was scheduled for surgery this past March. At that time she gave her employer a note from her doctor, which said that she couldn’t lift anything more than 10 pounds. Robbie is a certified nursing assistant so this directive put her job in jeopardy - she couldn’t lift anything so she couldn’t work. Her employer put her on FMLA but there was a glitch.

In early March, Robbie and Ben found out that their insurance company wouldn’t pay for the surgery. Apparently the hospital wouldn’t be able to accept Robbie so she had to find another doctor and another hospital. Not only did the insurance company deny surgery, it also denied her claim for short-term disability (STD) benefits.

It wasn’t until June before Robbie was slated for surgery. Meanwhile, she was unable to work and hadn’t collected a dime from Lincoln, her health insurer. Her insurance rep said that they wouldn’t pay short-term benefits until she had her hysterectomy. That was one small snippet of good faith: Robbie received a check that covered STD from the day of her surgery until July 17. Then nothing.

“We called Lincoln and got the run-around,” Ben explains “They tell us to call this person, that person says call someone else. Robbie then had to send another doctor’s note to the insurance company and we still don’t know if she will get benefits after July 17th.

More DENIED DISABILITY INSURANCE News
“Robbie’s employer called her last week to let her know that her FMLA ran out and they could no longer hold her position. In other words, she was fired. They had already extended the FMLA four more weeks. Her supervisor did say that that once the doctor releases her she can re-apply for her job, which should be in another two weeks.”

“We are asking an attorney to help with our claim so that Robbie is compensated for what is rightfully hers: she should be paid disability from March up until her surgery.”

Posted by
steve
on August 5, 2013
Citi bank, Bank of America and Chase all defrauded me on payment protection plans My wife had Leukemia we got approved for payment suspension/Disability and no interest on these cards while she was on Chemo and bone marrow Transplant well She did not make it and Died Oct 2009. I filed for death benefit part of the coverage a few months later after getting her death cirf. All of them then decided for some reason or another We no longer qualified and denied the claims, EXCEPT Discover Card 3 1/2years later they all have come after me with judgements and garnishments even though I am disabled and cant pay nor do I think I should. this whole Payment protection thing was a scam.ALL the banks have had some lawsuits defrauding people on these policys. and now nolo nger carry them. I tried to find a Lawyer but every lawyer I spoke to said the banks pockets were to
deep to try and win, my perfect credit was destroyed and they CAN all go to HE%$
Posted by
Steve
on August 4, 2013
I had a similar experience with Lincoln and I had to get a lawyer to get anything. I never got short term disability but my lawyer did get me long term disability and now I am fighting to continue disability. I was all so place on a 10 pound lifting restriction for life due to a very bad back. I was fired by the company I worked for just the same as Bobbie. I have gotten my disability through Social Security and that helps but it is one forth of what my pay was. I will continue to fight Lincoln as long as I can afford to. So find a good lawyer and fight. I did and I got some money. Good luck.
Posted by
David Nabatov
on July 26, 2013
She would need to provide additional medical documentation in order to extend her claim. She needs to connect her doctor and the disability insurance company. Insurance companies require a reevaluation after a certain period of time. Once they receive it disability checks can continue.