A settlement deal worth $6.5 million that was given preliminary approval in February of this year was granted final approval in June, ending about a decade of legal wrangling involving a gentlemen’s club franchise and the dancers who toiled within. The Déjà Vu lawsuit combined a somewhat unique sector with an old problem: whether or not dancers, in this case, are indeed employees or independent contractors. 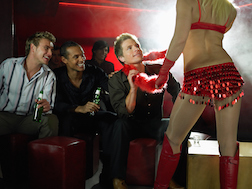 However, even though both sides in the dispute hailed the settlement as a win, the ruling has been appealed. The delay could mean class participants may have to wait upwards of a year for financial closure in the dispute.

The defendants in the case included Déjà Vu Consulting Inc., operators of gentlemen’s clubs across the country. Dancers hired by Déjà Vu asserted that Déjà Vu incorrectly and unjustly classified them as independent contractors, stiffing them of benefits and other perks that are reserved for bone fide employees. As such, plaintiffs assert they were denied the right to have been paid minimum wages and benefit from existing employment laws observed both federally, and at the state level.

According to Court documents associated with the settlement, two settlement funds were made available from which class participants could choose: a $2 million pool from which dancers could pull a single cash payment, or a $4.5 million secondary pool that was made available to cover 60 percent of a dancer’s rent-credit or dance-fee payments for a period of one year.

The available pool(s) for dancers would be reduced by costs for regulatory fees under the California Private Attorneys General Act amidst other costs, together with $1.2 million in attorney’s fees.

Beyond the monetary settlement in the Déjà Vu lawsuit, is a requirement for the defendants to evaluate every dancer toiling in their clubs to submit to a federal economic realities test in order to help confirm status as either an employee, or an independent contractor.

The requirement for the test is something to which both parties in the Déjà Vu employment lawsuit agreed, and applaud.

“We worked very hard to bring this change about,” said Jason J. Thompson of Sommers Schwartz PC, the firm representing the dancers. “It was a hard-fought settlement, and [US District Judge Stephen J. Murphy III] understood the value of this change. We’re very happy on behalf of the all the dancers that need this, who’ve been working for years without the rightful benefits of the laws.”

Attorneys representing the defendants agreed, noting that the requirement brings clarity to a heretofore murky employment environment and indeed represents a win for both sides. An attorney with Shafer & Associates PC, who represented Déjà Vu, noted that the requirement would help both the defendants and its dancers avoid future litigation. Brad Shafer noted following the announcement of the settlement approval, that an earlier settlement involving Déjà Vu in 2011 dealt only with monetary issues, leaving employment status adrift.

The Déjà Vu employment lawsuit began in 2008 with an action against CinLan Inc., another operator of gentlemen’s clubs. Déjà Vu was named as a co-defendant by the plaintiff, who was a dancer in Michigan. The plaintiff was a Jane Doe – she was not identified in the lawsuit. The lawsuit settled in 2011 for $11.3 million but failed to address ongoing employment status. Meanwhile another unidentified dancer filed a Déjà Vu lawsuit alleging misclassification, with an amended complaint granted class action status.

If you or a loved one have suffered losses in this case, please click the link below and your complaint will be sent to an employment law lawyer who may evaluate your EMPLOYMENT claim at no cost or obligation.
Request Legal Help Now