While consumers can rejoice that their vehicles will be made more safe, Toyota finds itself in an even tighter vice during tough economic times after announcing that it will replace or repair the accelerator pedal on about four million vehicles. 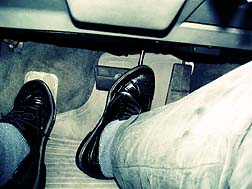 The affected vehicles comprise nearly half of all vehicles Toyota has sold in the US over the last several years.

Earlier this month Toyota announced one of the largest recalls in US history following the horrendous crash of a late-model Lexus that claimed four lives. At the time, the recall was for improperly fitting floor mats. On November 2nd Toyota announced it would voluntarily recall floor mats that could interfere with the operation of accelerator pedals if the mats shifted, jamming the pedals.

Since then, according to the New York Times, federal regulators have been pressuring Toyota to ensure the safety of the various models currently under the microscope.

Various reports from consumers have suggested incidents of rapid acceleration and jammed, or improperly functioning pedals that had nothing to do with floor mats.

The Lexus ES350 that crashed near San Diego in August was driven by an off-duty police officer with advanced knowledge of distress driving technique. And yet he was unable to prevent the car from accelerating to 120 miles per hour before it crashed into another vehicle at an intersection. All four occupants of the car, all from one family, were killed.

Sandra Reech told the New York Times she was driving her 2008 Tacoma on an expressway near Pittsburgh in March when her accelerator got stuck. "I was careening down the highway at well over 100 miles per hour," she said. "I was standing on the brake and it wouldn't slow down."

She eventually got the car into neutral and pulled off the road. She then checked the floor mat, and it "wasn't in the way of the gas pedal," she said.

More Defective Product News
Several lawsuits have been filed against Toyota, including a class-action suit in California

Under the new recall, Toyota will shorten gas pedals by three-quarters of an inch, and in some cases remove padding from the floor to prevent the pedals from getting stuck on floor mats.

The company also said it would develop replacement pedals that would be available by April, and provide modified floor mats. In addition, Toyota said it would start installing 'brake override' systems as standard equipment on many of its new 2010 models.