It's not a new issue, as the stuff has been in our water supply for a while. But when the headlines scream 'Rocket fuel in Baby Formula,' a story that's been percolating for years takes on new life, in concert with the new lives drinking in nourishment that is admittedly toxic and potentially dangerous. 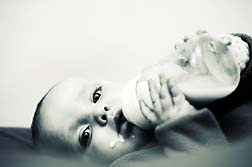 Results of a study released April 2nd by the Centers for Disease Control and Prevention (CDC) in Atlanta reveals that 15 brands of baby formula tested positive for perchlorate, a chemical that is found in the water supplies of more than half of the country.

Yes, and it's also found in rocket fuel.

The specific brands of formula were not identified. However, two of the most popular milk-based baby formulas in which perchlorates were found are said to command a whopping 87 percent of the baby formula market.

According to the Environmental Protection Agency (EPA), perchlorate levels found in the products fall within acceptable parameters.

However the CDC says not so fast. When one considers that perchlorate is also found in the water supplies of 35 states, what happens when a parent mixes milk-based powdered baby formula containing acceptable levels of perchlorate, with water that also contains perchlorate?

The concern is that the combination could prove dangerous, especially for infants.

"The widespread penetration of these products, and the potential for utilization of water for reconstitution that has even minimal concentrations of perchlorate," the researchers write, "suggest that a significant number of infants consuming bovine milk-based [powdered infant formula] with lactose, will have perchlorate doses in excess of the [recommended limit]."

The study appeared in the March 2009 issue of the Journal of Exposure, Science and Environmental Epidemiology and is rippling through parenting circles as caregivers express concern as to what they're feeding their kids.

Soy products do not appear to be affected. However infant formula derived from cow's milk is an issue due to the grass they feed on. Grass draws, naturally, from the indigenous water supply. If that supply contains perchlorate, then the chemical is drawn into the grass—which the cows eat—and pass on to their milk.

While the EPA appears to be standing by its position that perchlorate levels in baby formula are at acceptable levels, not everyone agrees. The Environmental Working Group, an organization that advocates for stricter limits on a variety of chemicals, contends EPA's recommended limit is set "too high to protect public health" and understates the risk.

The debate continues. Dr. Sheela Sathyanarayana, a pediatrician who works on environmental health issues at Seattle Children's Hospital and at the University of Washington department of pediatrics makes the point that in isolation the perchlorate levels are not of particular concern. It's when you combine those levels with perchlorate derived from several other sources that gives pause to foster concern about the potential cumulative effect.

Dr. Sathyanarayana told ABC News that none of the various studies identify a link between perchlorate contamination in water and infant health.

More Defective Product News
However another professor of pediatrics, Keith-Thomas Ayoob of the Albert Einstein College of Medicine, considers the findings "disturbing" and "a wake-up call to municipalities to clean up their water supplies, if at all possible."

The CDC included a caveat that the results of their findings may not be relevant throughout the entire United States. That may be well and true, but unless a parent were to take the time, or have the opportunity to verify perchlorate levels in baby formula, as well as the levels of the contaminant in their regional drinking water supply, how would they know?

Until more conclusive evidence becomes available, one might forgive parents for switching to bottled water for mixing their infant formula. Or perhaps contacting a legal professional if there have been health issues inherent with their infant, that appear to have come out of nowhere…

Click to learn more about LawyersandSettlements.com
LawyersandSettlements.com - A trusted, independent legal news provider bringing quality news and information on legal cases and lawsuits filed in the United States of America to its readers since 2002. Over 650,000 legal help requests including Defective Product Cases, and Food and Drink have been forwarded to lawyers all across to the country.