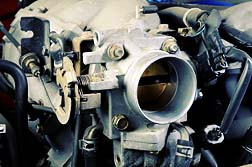 Wright has recently filed a national class action suit on behalf of two representative plaintiffs who own Toyota vehicles equipped with the Electronic Control System with Intelligence (ETSI) accelerator system, both of whom were caught by surprise several times when their vehicles suddenly and wildly accelerated.

Toyota's ESTI system sends an electronic signal to the engine to open and close the throttle valve. Other automakers use a similar computerized system but have added a feature that causes the brake to override the throttle if they are both applied at the same time – a feature Toyota's system does not have.

Toyota has blamed the problem on misplaced floor mats, but Wright doubts that is the problem. "Since we filed this lawsuit we have been contacted by a large number of people," he says. "Over and over again people say they know it wasn't the floor mat."

According to the research gathered by attorneys at Wright's firm, McCune & Wright, from consumer-reported complaints to the automaker and the National Highway Traffic Safety Administration (NHTSA), sudden unintended acceleration in Toyota and Lexus vehicles has been linked to at least 16 fatalities and 243 injuries over the last eight years.

In August, a Lexus ES350 driven by a California Highway Patrol officer suddenly accelerated to 100 miles an hour for no apparent reason. The car crashed, killing the officer and three members of his family. The accident is believed to have been caused by the faulty Toyota ETSI system.

Wright's firm has handled dozens of auto litigation suits, and as Wright sees it, all you have to do is follow the data to see the problem with Toyota's computerized acceleration system. "Our belief is that the rates of uncommanded accelerations correlate to the introduction of the ETSI," says Wright. "Around 2001 or 2002 is when we saw the first spike in complaints."

More DEFECTIVE PRODUCTS News
Wright calls the Toyota acceleration issue an "itinerant problem." He explains: "It is not an easily reproducible problem. If the computers are not programmed to recognize sudden acceleration as a fault, then it leaves no trace and that leads people to think there isn't a problem."

Anybody who owns a Toyota or Lexus vehicle that is equipped with electronic throttle control system is eligible to join the suit. Wright expects to hear from people who were injured or had a loved one killed in a runaway Toyota vehicle. The firm is preparing to represent those people as well in a personal injury suits.

David Wright is a name partner with McCune & Wright and a graduate of the Pepperdine University School of Law in Malibu, California. He obtained his B.S. at Atlantic Union College in Massachusetts. Wright has won a number of multi-million dollar lawsuits and specializes in representing people harmed by dangerous products.