Burned in More Ways than one by Sunbeam Products

Kay was wearing a Sunbeam heating pad over her shoulders when she suffered a grand mal seizure. When she regained consciousness some 20 hours later, the heating pad proved defective and had not automatically shut off as it was supposed to. She found it had burned her on the rib cage and around her back, in some places right through to the bone.

"This was in 2003. I called Sunbeam and told them to get the product off the shelf. It took their attorneys, the Moffett & Dillon group, ten months to call me back. They wanted to see photos and letters went back and forth between us. In July 2006 I got one saying they had reviewed all my injuries, photos, hospital records and the notes from the burn specialist, and could I send them any additional medical records and bills so they would have complete treatment and costs.

I'd sent my heating pad to them and they agreed it remained on after 20 minutes. Well that's the problem! After 20 minutes part of the hand piece had already melted." 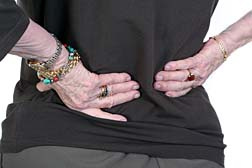 "Several times they asked what I was looking for in terms of a claim. To me that sounded like they were going to take responsibility for their product and take care of things but in fact it turned out they'd been baiting me from 2003 to 2006."

"I didn't name a price. I was going to sit down and talk to them. And I started doing some research of my own."

"Then the attorneys came back and said the statute of limitations on my claim had a limit of one year and was up in 2005 yet they replied to me in 2006 with talks of a claim, and here they were now denying responsibility. I was told by two attorneys there was nothing I could do since I hadn't initially gone to my attorney."

More News
"It was then I discovered other incidents on the internet. One website on recalled products led me to case after case on Sunbeam. I said to myself, 'you mean my case is common, not just one in a million? That's when I realized I'd been baited."

"On the internet I read about one old lady who couldn't get up by herself; she had a Sunbeam blanket on her and the person looking after her went out to pick up her child. When she got back the house was burned to the ground. The investigator thought it was a candle, said they didn't have enough evidence to show it was the blanket. He didn't do his job correctly and that family lost the case."

Kay's case is now closed but she is offering the use of her photographs towards a class action suit or possible fraud/legal malpractice against the Moffett & Dillon Group.

Posted by
Pat Villa
on June 8, 2016
I had a coffee maker..got burned.
Posted by
Patricia
on May 4, 2016
Donna yes you do.
Posted by
Donna
on December 21, 2015
Nov 14,2015 I was sitting my porch swing. All of a sudden the left side of my buttocks started hurting. Naturally I felt and it was mushy,my daughter was here so I asked her to look. She said omg Mom you've got 2 blisters and the rest of the area was red. I had her to take photos.plus she has taken additional ones since then. O notified Sunbeam and asked if they had any recalls. The lady on the phone said no, she asked if I still have the heating pad I said yes and I also had the original box. Her solution was to send me another one. Well one gay I received the return label, a couple of days a later I received a new heating pad. A couple days later I received another call (from another person). I informed him that I went to the Dr. He told me I was right at a 3rd degree burn, i will have nerve damage and a nasty scar. After reading what others have said, then I don't need an attorney because they won't do anything about it. Its been over a month and it's trying to heal. Where the blisters were, there now holes. Any suggestions? Do I still need to keep my appointment with my attorney
Posted by
Angel Wilson
on April 25, 2015
I had been using a heating pad for years and it broke. I purchased a Sunbeam velour heating pad from Walgreens and the first time I used it I got third degree burns on my backside requiring two surgeries and numerous skin grafts and alot of pain and suffering. I still have a huge scar on my backside and all Sunbeam offered was to replace the pad. My lawyer informed me yesterday I probaly won't get anything since Sunbeam did their own tests and said nothing was wrong with it. With all the other people who have been burned they still haven't pulled it off the shelves. I purchased a good cheap pad recently and even on high it is not nearly as hot as the Sunbeam was on setting two. It went from one to six.How many more people will go thru this extreme pain and be able to do nothing about it? I am thinking I need another lawyer. My medical bills so far have been well over $100000. And I cant take a bath anymore. Any suggestions?
Posted by
Barbara
on March 28, 2012
I received a second degree burn by a Sunbeam heat pad in 2010 (November). I now have a large scar on my leg. I contact the company, they called and said they'd take care of all my expenses and compensate me for my injury. They asked for paper work and pictures etc. in January 2011 and we sent everything they asked for the next day.

In June of 2011 their lawyer contacted us and said her client (Jarden / Sunbeam) had "just received" our paperwork and requested the same information all over again.

After more correspondence they offered me expenses but no compensation for the pain and suffering their defective product had put me through - then they said it was MY fault?!? Why would they offer to pay for expenses on a defective product and then blame me for sleeping on it as the reason for the burn?! Their product burned me. It was defective. They scarred me and many other people and they should PAY for the pain and suffering they've put people through.