Paramjit Singh had a small heart attack and had to undergo bypass surgery at the Providence Everett Medical Center, which is one of the best cardiac hospitals around. However, things didn't go exactly as expected when Singh didn't awake out of the anesthesia. Instead, he spent six weeks in the hospital before he opened his eyes.

When Singh awoke, he found his friends and family surrounding him, praying for his survival and he realized that he was being told that he was in dire need of a new heart.

What happened was that the routine bypass surgery that took place on October 11, 2004 went perfectly fine. However, when the operation was complete, the surgeon was not able to get Singh's heart to beat by itself. What doctors found was that a catheter used to monitor blood flow was inserted into Singh's heart and it overheated. The device reached a temperature of 500 degrees, which caused it to melt and cook Singh's heart from the inside. 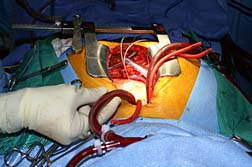 The surgeons then made the decision to keep Singh connected to a machine that would circulate his blood while they searched for a transplant. Singh now has a shorter life expectancy and is battling a drug-induced cancer. His kidneys are at risk of failing and he may have to face another heart transplant.

All of these happenings are now being told in Snohomish County Superior court in front of a jury.

Both Singh and the hospital have filed a lawsuit against the catheter's manufacturer and it has been stated that the company is accepting full responsibility for the life-threatening injury that Singh received.

What the trial is determining is how much compensation Singh and his family should receive and whether or not the hospital has any blame in the situation.

It was on December 28, 2004, which was 11 weeks after the incident that Singh received a new heart at Seattle's University of Washington Medical Center. However, the challenges that Singh faces are life-threatening.

54-year-old Singh used to be a soldier in the Indian army and was a track star, in which he could run the 440-yard dash. Now he has to sit and wish he could help his young children, ages 11 and 7, do work in the yard. He more or less must pass his time sitting and cannot visit his father in India because his immune system is weak due to the cancer. He has had to stay away from the courtroom in fear of catching a cold or encountering too much stress.

On the other hand, the lawsuit could mean millions of dollars for the Singh family. Singh's lawyers have alleged that the manufacturer of the device knew there was a danger and did nothing. The lawyers state that this should result in punitive damages awarded by the jury.

More News
What the lawsuit is centering on is a piece of computer contained within the Vigilance monitor's program, which is the program that controls the catheter that melted. The company, Edwards, manufactured both the monitor and the catheter and Edwards is the leading producer of products used in the treatment of cardiovascular disease.

As of July 2006, thousands of the Vigilance monitors were recalled. This took place 21 months after Singh's injury and four years after an incident in Japan in which the catheter had overheated. Fortunately in the Japan incident, the catheter was not inside the patient's heart, but it began to smoke and fell apart after it charred.

Edwards accepts full responsibility for Singh's injury but states that the hospital must share blame because the cable used to connect the catheter to the monitor was defective.

As for Singh, his goal is that what happened to him doesn't happen to anyone else.