A massive crib recall was issued on Thursday by safety officials and they warned parents that they should not put their babies in their beds with soft bedding such as pillows due to the risk of suffocation.

A total of 24,000 cribs made in Indonesia were recalled due to a high risk of children falling out. Imported by Munire Furniture Inc., the cribs have brackets that are not proper in allowing the mattresses to be completely lowered. This can result in children inside of the cribs crawling over the railing and falling, which can result in serious injury.

This recall includes the Majestic Flat Top, Majestic Curved Top, Captiva, Essex, and Brighton/Sussex cribs. Each one of these models contains different model numbers that are part of the recall. As for where the cribs are sold, they are sold in children's specialty stores and were sold in these stores between November 2005 and November 2007. So far, no injuries have been reported regarding use of the product, but that doesn't mean that injuries have not occurred and simply not been reported. 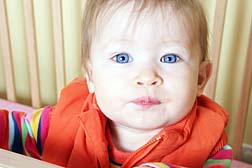 However, the safety commission went ahead with warnings to parents that what they place inside the cribs can pose a potential safety hazard. Between the years of 2002 and 2004, 241 children under 5 years of age died in incidents involving nursery items. The soft bedding has been deemed the main factor in these deaths and 40% of them involved putting the bedding in cribs. Doing things such as placing the child face down on the soft bedding has been the culprit for these deaths as well as having too much bedding in the crib with the baby.

Experts state that less should be placed within the crib. There should be no adult pillows or stuffed animals. Babies also shouldn't sleep with baby quilts in order to reduce the risk of suffocation. But how soft is too soft? Some of the products are baby pillows that have led to the suffocation, but so far the deaths have been associated with placing the baby face down in the crib rather than on their back.

The agency has said there have been other deaths in which baby products were involved. These products include baby baths and bath seats, but stated the deaths were the result of the baby being left unattended. As for bath seats, some of the deaths occurred because the baby fell out of the seat or the seat tipped, immersing the baby into the water. There have also been playpen recalls involving too much soft bedding being placed within the playpen.

More News
However, the most recent injury data was collected in 2006 and it stated that there were 66,400 injuries involving nursery products and the injuries occurred in children under 5 years of age. Most of these injuries involved baby carriers and car seats, but did not include any incidents in which a motor vehicle accident was involved. Following these injuries are cribs and the mattresses used within the cribs.

In regards to the crib recall, this is just one of many that have occurred in recent years, but none of those recalls were the result of deaths, but rather injuries from faulty designs. Any time a recall is issued on a product, especially products that pose a danger to children, it is important to follow all information given regarding the recall. If in doubt, call the store in which the product was purchased because they are one of the first to be given the information about what it is they are to do to compensate the customers.