FDA says Bisphenol A is Safe, But Debate Rages On

A chemical found in everything from water bottles to CDs has been given a reprieve by the US Food and Drug Administration. According to the FDA bisphenol A does not pose a risk for humans, although "there are always uncertainties associated with safety decisions," the agency says in a statement. But the story doesn't end there. Despite its reassurances the FDA has been criticized for using industry-funded data in order to arrive at its conclusion, and health advocates continue to claim that bisphenol A is anything but safe. 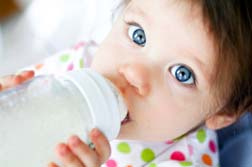 Bisphenol A is a commonly found chemical used to harden plastic, which is in turn used to manufacture everything from baby's bottles, to sunglasses, to water bottles and CDs. Anything that is required to have the strength and rigidity of glass, has bisphenol A in it.
Even canned food will have plastic containing bisphenol A lining the inside of the can.

Its use is so prolific that manufacturers such as Dow Chemical, BASF and Bayer AG collectively produce six billion pounds of the stuff each year in the US.

But is it safe? The jury is still out on that one.

It appeared earlier this year that bisphenol A was doomed after the National Toxicology Program raised concerns over bisphenol A, commonly found in shatterproof water bottles, including baby's bottles. At issue is the potential for the chemical, similar to the hormone estrogen, to leach from the plastic and to be ultimately ingested by humans.

It is that concern which promoted the Canadian government to ban the use of baby bottles containing bisphenol A. Some US States are considering similar moves, and the State of California is on the verge of enacting legislation that bans the chemical for the manufacture of baby's bottles there.

Needless to say the chemical industry has greeted the FDA position with enthusiasm. The American Chemistry Council has defended the safety of bisphenol A all along, and states that it relies on the FDA for guidance.

However, not everyone is happy with the FDA, or agrees with its findings.

"It's ironic FDA would choose to ignore dozens of studies funded by the National Institutes of Health—this country's best scientists—and instead rely on flawed studies from industry," said Pete Myers, chief scientist for Environmental Health Sciences, in a statement to MSNBC. Myers goes on to claim that the agency disregarded recent studies of bisphenol A's effects included in the National Toxicology Program's April draft report
that suggested low doses of bisphenol A can cause changes in behavior and the brain, and that it may reduce survival and birth weight in fetuses.

The findings were derived from animal studies. The FDA concluded that any levels leaching out from water bottles, baby's bottles or the liners of food cans would not be at a sufficient level to harm humans. The agency also determined, in its view, that there remained "inconsistencies and inadequacies which limit the interpretations of the findings."

Meanwhile the Centers for Disease Control and Prevention (CDC) in Atlanta maintains that a whopping 93 percent of Americans have been found to have traces of bisphenol A in their urine. Studies have suggested that bisphenol A can disrupt hormones in mice, although the FDA takes the position that the levels to which people are exposed are thousands of times below what would be considered dangerous.

No one appears to be denying that the leaching is happening in the first place, so it appears quite certain that traces of bisphenol A are getting into your system from that water bottle, or from handling that CD. Same goes for baby's bottles. The debate then, is how much is considered safe.

The FDA, and the chemical industry, appears to suggest that a little bit is okay. However, health advocates and parenting groups maintain that even trace amounts are a reason for worry, and continue to advocate a total ban on its use.

More NEWS News
As various States continue to wrestle with the issue, including California, the FDA is gearing up for a September meeting that will see various independent advisors debate the chemical's safety.

Critics wonder about the timing of the FDA's preliminary report, released on the eve of California's expected adoption of statutes aimed at banning the chemical in baby's bottles.
Was the early release of the report intended to sway State lawmakers, or cause them to appear misguided in the passage of the new legislation?

Time will tell. In the meantime some manufacturers of water bottles, including Nalgene and Camelback, have begin producing water bottles without bisphenol A in anticipation of a deepening rift in the debate and a worsening outcome, pending further study, for bisphenol A.